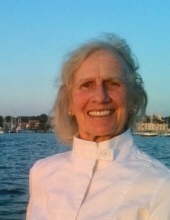 Virginia Coates Chafee died March 21, 2020, of natural causes at her home, Greene River Farm, in the Potowomut area of Warwick, Rhode Island. She was 93.

Mrs. Chafee was born September 17, 1926, in Dublin, N.H., at the farm of her maternal grandfather, noted painter George de Forest Brush. She grew up on the north shore of Long Island, New York, where her father, W. Shelby Coates Sr., practiced law in Locust Valley, and her mother, Jane B. Coates, raised the couple’s four children in the village of Bayville.

Mrs. Chafee later ascribed her most stimulating education to Mrs. Archibald Roosevelt’s school for nine girls where readings in literature and history, performance of plays, recitation of poetry, study of natural sciences, and exposure to classical music afforded Mrs. Chafee a lifetime of pleasure in those realms. Summers at the Dublin farm among her artistic Brush relatives further enlarged her cultural world. Mrs. Chafee lived her secondary school years with cousins in Manhattan while attending the Nightingale-Bamford School there. Following that, she graduated from Finch College, also in Manhattan.

While on a ski weekend in Stowe, Vermont, Mrs. Chafee met John H. Chafee of Providence, Rhode Island, a Harvard Law School student and Marine Corps veteran of World War II. They were married in 1950.

Two days after the birth of the couple’s first child in July 1951, John Chafee departed for combat duty with the Marines on the front line in Korea. On his return from the war, the couple settled in Warwick where they reared their family of six children. Meanwhile, John Chafee launched his career in electoral politics, rising from the state legislature to the Rhode Island governor’s office, and eventually to a seat in the United States Senate. They built a unique house and a barn in the Potowomut meadows along Greene River where Mrs. Chafee, not a public figure herself, sustained a lively world of children, horses, geese, ducks, chickens, and a large and productive organic garden. She knew that good food began with good soil. Throughout her life, Mrs. Chafee enjoyed a love affair with the natural world – its forces and rhythms, its color and complexities, its purpose and design.

In October 1968 the Chafees suffered the death of their elder daughter, Tribbie, a talented equestrian, in a horse accident at age 14. The road back was long.

In 1969 John Chafee became Secretary of the Navy at the Pentagon, and the family moved to McLean, Virginia, where the younger children entered school, and Mrs. Chafee formed lasting friendships. John Chafee then won the first of four elections to the United States Senate. During those years, Mrs. Chafee served memorable homecooked dinners to many small parties of senators – Republican and Democrat – scientists, educators, and government officials who gathered for good food and conversation at the Chafee table.

Long a source of private influence on her husband’s policy-making in the environmental field, Mrs. Chafee also played a role in a successful effort to save from development 336 acres of woodland along the Potomac River, which became Burling Park, now the popular Scott’s Run Nature Preserve.

John Chafee died in office in 1999, and Mrs. Chafee returned to the farm in Potowomut. Ever alert to issues in the news, she never failed to stimulate discussion among her frequent family visitors. Her unaffected warmth and genuine interest in the lives of those around her endeared her to all she met. To the end, she remained committed to the causes affecting life on our planet.

She is survived by her children, Zechariah Chafee of Providence, RI; Lincoln Chafee of Teton County, WY; John Chafee of Los Angeles, CA; Georgia Chafee Nassikas of McLean, VA; and Quentin Chafee of Saunderstown, RI, and their spouses, 11 grandchildren and two great grandchildren as well as her brother, W. Shelby Coates, Jr. of Newport, RI and her sister, Elise Alsop of Peterborough, NH. She was pre-deceased by another sister, Jane Allison Halaby, formerly of McLean, VA.

A celebration of Mrs. Chafee’s life will be held at a time and place to be determined. Donations may be made in memory of Virginia Chafee to the Community Food Bank of Rhode Island www.rifoodbank.org or the Monadnock Conservancy www.monadnockconservancy.org.