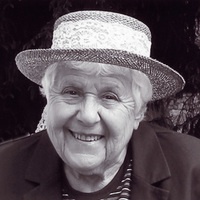 Teresa was born in East Greenwich on September 1, 1918, to Fortuna “Ann” (Baldino) and Gioacchino “Jack” Palermo.  Her birth certificate was filed on September 2, 1918, by the doctor and this began her life-long relationship with “the imperfections of government.”

Teresa attended East Greenwich schools. She was a graduate of St. Xavier’s Academy and the Katharine Gibbs School. She began her professional career working in the office of a local shipyard and the new Quonset Point Naval Air Station.

Married to Captain John A. Romano, Teresa actively campaigned with her husband and was involved with the Republican party during her husband’s tenure in the Rhode Island House and Senate.

She worked at the family grocery and helped establish Palermo’s Restaurant (Pal’s) in East Greenwich and was the last of the Palermo family to run the restaurant with her husband before it was sold upon their retirement.

USA first, Teresa was proud of her Italian-American heritage and maintained a relationship with her relatives on the Island of Ischia. She and John always enjoyed visits with their Italian families and cherished the bonds their parents had kept alive.

She was a member of many organizations during her lifetime, she worked as a volunteer for many charities and was an active member of the East Greenwich Historic Preservation Society, the original Historic Districting Committee, the Navy League and Catholic Charities. She loved managing one of the first Navy Thrift Shops and was an avid volunteer for Navy Relief.

Teresa was a devout Catholic who volunteered in many capacities for Our Lady of Mercy Church and Our Lady of Mercy School during her lifetime. She often joked that she was the first take-out delivery girl because her mother asked her frequently to drive complimentary dinners to the local convent from the Pal’s kitchen in the 1950s.

One of her greatest joys was her correspondence with friends through cards and letters. She had a magnetic personality that lit a room when she entered, and people responded to her with smiles and friendship. She loved to give you her political point of view and watched the stock market and Fox Business News daily.

Her love of life kept her young at heart and few people believed her age when she told them. Her remedy for fighting the perils of old age was “hard work.” She was passionate about her faith, family, friends and country.

Besides her husband she is survived by her children Teresa P. (Terry) Romano and John M. “Jack” Romano, PFD retired and extended family. Like her favorite Hallmark movies, life ended with great love and a kiss.