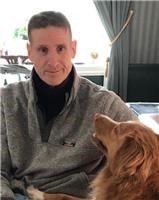 Steven Mark Dunwoody, 63, of Falmouth, Maine, passed away peacefully on April 8, at Mercy Hospital in Portland. His passing concludes a remarkable life replete with achievement and he will be remembered for his determination and optimism in the face of adversity.

Steve was born in Rhode Island, graduating from East Greenwich High School then the University of Maine Orono in 1979. He was a member of the UMaine swim team and active member of Phi Gamma Delta. Steve was accepted into the U.S. Navy Officer’s Candidate School and secured a coveted billet as F-14 Tomcat pilot; he rose to the rank of Lieutenant Commander, flying missions in the North Atlantic, Mediterranean, and Persian Gulf, owning over 400 (traps) on U.S. Carriers. LT Dunwoody crossed Muammar Gaddafi’s “Line of Death” during the Libyan conflict earning him Veteran of War status. LT Dunwoody served on the USS America and USS Roosevelt stationed in Virginia Beach and San Diego, later joining the U.S. Navy Reserve.

Following active enlistment, Steve flew 737 & 757 jets for Delta Airlines. He was an outdoorsman who loved skiing, climbing and hiking, accomplishing the summit and traverse of Mount McKinley. Steve was an avid supporter of the Boston Red Sox and the New England Patriots. He was a devoted father to Calvin, Sam, and Camille. Steve’s commitment to his family was unshakeable.

Steve is predeceased by his parents, Helen (Pansewicz) and Calvin Dunwoody of Kennebunk, Maine; his brother, Peter Dunwoody, of Kingfield, Maine. He is survived by his three children, Calvin, Samuel, and Camille Dunwoody of Portland, Maine as well as his beloved dog “Tuck,” and brother, Donald Dunwoody and his wife, Sherri, of East Greenwich, as well as niece and nephews James, Paul, Cael & Helena. He also leaves behind numerous relatives, Navy shipmates, and friends from Maine to California.

There will be a memorial service at Saint Mary’s Episcopal Church of Falmouth, on June 19 at 1:00 PM. Donations can be made to the Maine Veterans Association and the Miami Project.

You can leave an online condolence HERE.