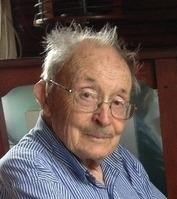 Robert Weis Merriam, age 95, of East Greenwich, passed away Monday, April 1, 2019, at home. Born in Providence, Rhode Island, he was the son of the late Paul Adams and the late Marian (Lewis) Merriam. He was the beloved husband of Nancy (Allen) Merriam. Growing up in Edgewood, sailing, and motoring on Narragansett Bay with his family, Bob was destined to be on the water. His pride and joy was his sailboat, Victoria, a Nova Scotia Pinky, which he lost in Hurricane Carol in 1954. His business, Merriam Instruments, in Point Judith, Rhode Island serviced the fishing fleet and some of the finest sailing yachts. Bob provided technical support to the fishing community and worked with the Radio Technical Commission for Maritime Services (RTCM), and the Federal Communications Commission FCC) in Washington, DC to ensure fisherman’s safety at sea. Bob’s love for radio and electronics launched him into his career in the U.S. Army. Immediately after his graduation from Proctor Academy, in New Hampshire, he enrolled at Harvard University, but soon enlisted in the U.S Army. After basic training, Bob was stationed in Liege, Belgium during the Battle of the Bulge, as part of the Army Signal Corps. Following his military service, Bob finished his degree at Harvard earning both a Mechanical Engineering degree and a Master’s in Electrical Engineering. He taught at Swarthmore College for several years before moving back to Rhode Island. While teaching at Brown University, Bob met his future wife, Nancy, a textile designer with a degree from Rhode Island School of Design. The couple married at the First Unitarian Church of Providence on December 21, 1954, during a blizzard. Bob and Nancy settled in East Greenwich.

For 60 years, they were integral members of their community. On top of running his own business Bob was a registered professional engineer, land surveyor, recipient of US patents in radio electronics, founded the National Marine Electronics Association (NMEA), and founded in 1964, The New England Wireless and Steam Museum, which houses one of the finest collections of its kind in the world. Bob’s list of achievements, honors, and society memberships is a mile long. He was a Ham Radio operator, his call sign was W1NTE. He belonged to Radio Club of America, The Antique Wireless Association, Institute of Electrical and Electronic Engineers (IEEE), National Association of Power Engineers (NAPE), East Greenwich Preservation Society, East Greenwich Planning Board, East Greenwich Yacht Club, Preserve Rhode Island, Sons of the American Revolution, the Hope Club, The Society of Industrial Archeology and the Twenty-One Hundred Club. Besides his wife Nancy, he is survived by his children Susan Merriam and her husband Terry Jones, Paul Merriam and his wife Lindsey. He was the grandfather of Lucy Clara Merriam Jones. He was predeceased by a brother John Lewis Merriam. A Memorial Service will be held May 11, at 1:00 pm at The New England Wireless Steam Museum, in East Greenwich. Donations in his honor can be made to The New England Wireless and Steam Museum, P.O. Box 883, East Greenwich, RI 02818. He will be buried in the Merriam family plot at Edgell Grove Cemetery & Mausoleum in Framingham, Mass. For online expression of sympathy and more information please visit www.carpenterjenks.com