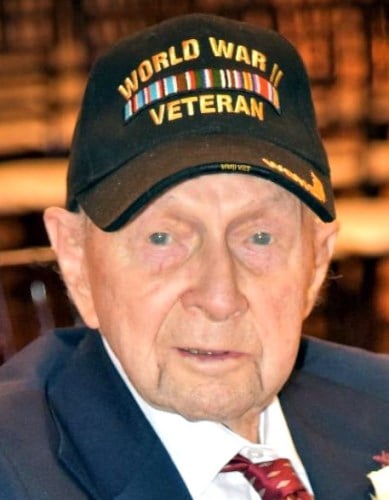 Raymond J. Pelland Sr. of East Greenwich, peacefully passed away on July 23, at his home, The Saint Elizabeth Community Green Houses, in the presence of his loving family. He was the devoted husband of the late Bomina M. Pelland (Vita) for 63 years. He is predeceased by his siblings, Wilfred J. Pelland, Charles J. Pelland, and Doris Dupuis (Pelland). Raymond also had a twin brother who died at birth.

Born in Woonsocket in 1917, he was the son of the late Ernest and Merelise (Brissette) Pelland. In his 104 years, Raymond lived through two global pandemics, the 1918 influenza pandemic (Spanish Flu) and the current Covid-19 pandemic.

Raymond migrated with his father Ernest in 1928, to Alberta, Canada, where they acquired two 160-acre homesteads. During the summer of 1928, his dad left him for five months to work on the Canadian Rail. At eleven years young, he lived alone, learning how to live off of the land from the local indigenous people. The rest of Raymond’s family later arrived and lived together in a single room log cabin that he and his dad had built. Raymond worked the homestead and local farms with his favorite horse, Maude, always at his side. He spent most summer nights sleeping outside along the local river banks. At the age of 21, his family sent him back to Rhode Island to support the migration of the family back to the States after the Great Depression. He traveled via boxcar over several months to Pascoag, R.I. where he lived with the Mousseau family before his family arrived and settled back in Woonsocket.

Raymond met his loving wife of 63 years when he moved to Westerly, to work on the restoration of beach homes after the hurricane of 1938. They married Feb. 18, 1939.

He was drafted into the U.S. Navy during World War II where he proudly served in the Pacific Campaign. He spent most of his naval time on the island of Guam where he remained until his return home when the war ended. It is in the Navy that he refined his lifelong carpentry and wood working skills. He held various jobs in his long career, but spent many years as a general contractor in Cumberland, R.I., where he raised his family. In addition to Cumberland, RI, Raymond and his wife lived in San Diego, Calif.. and Reno, Nev., during the early 1950s and again later in the late 1970s. Later in life, he built picnic tables and Adirondack chairs in Pawcatuck and then called Mystic River Homes his home for over 18 years; it was a place where he had made many great friends. He worked well into his eighties and drove his car until he was 99. Right before his 100th birthday, Raymond moved to East Greenwich, where he was loved and cared for by the staff at the St. Elizabeth Community Green Houses during the final four years of his life.

A Mass of Christian Burial will be held at 11 AM on Friday, July 30, at Saint Mary Star of the Sea in Narragansett, followed by burial with Military Honors at the RI Veterans Cemetery in Exeter. Calling hours are respectfully omitted. In lieu of flowers, memorial contributions may be made in his name to the St. Elizabeth Community, 2364 Post Road, Suite 100, Warwick, RI. 02886.