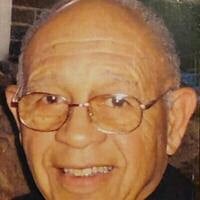 Pash R. Lima, 96, passed away peacefully on Jan. 15, 2023. He was the loving and devoted husband of Barbara M. Lima (Harris) from East Greenwich, who he was married to for 67 years.  Pash was born in Warwick and was the son of the late Robert Lima and Iphigenia M. Lima (Miranda).

He was preceded in death by his late brothers, Manual and Anthony, and his sisters, Mary and Joanna, along with his late son Michael. He is survived by his wife Barbara, sons William and John (wife Linda) and daughter Pamela. He has 6 grandchildren and 4 great grandchildren. To all in his family he was known as Papa, a family tradition.

Pash was an avid reader and golfer and was also a gifted musician who played the violin and loved to play and sing Cape Verdean songs at his home for family members. He won team and individual golf tournaments while employed at United Wire and Supply in the late 60s and early 70s and continued playing golf with family and friends well into his mid-80s.

Pash was a very skilled handyman who could execute electrical, carpentry and stonework. In fact, he along with his brothers-in-law Kenny and Lenny Harris built his home in East Greenwich. He also built decks, finished basements, and repaired boilers for his children’s homes.

Pash was a veteran who served in World War II.