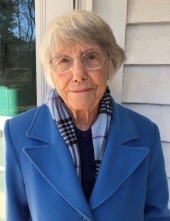 Nancy is a graduate of Classical High School Class of 1945 and earned her Bachelor of Fine Arts in Textile Design at R.I. School of Design in 1949. She served in numerous capacities for RISD, including Class Agent, President of R.I. Chapter of Alumnae Association, and member of RISD Alumnae Governing Board. Nancy was a talented textile designer at Verney Corporation in Taunton and she founded the Department of Textile Design at New Bedford Institute of Textiles and Technology, which is now part of UMass.

As co-owner and Vice President of Merriam Marine Radio and Merriam Instruments in Point Judith, she and her husband, Bob, ran a successful business for many years. She was one of the founders and an honorary member of the National Marine Electronics Association (NMEA), serving as the treasurer for 15 years, as well as a delegate. Nancy was the first woman moderator of the Radio Technical Commission for Marine Services (RTCM) in Washington, D.C.

Nancy was also the co-founder and director of the New England Wireless and Steam Museum, Inc., where she served as treasurer, secretary, and librarian since 1962.

Nancy was beautiful, funny, smart and artistic. She was the definition of a hot sketch, a proper lady, with a sharp wit and no fear of getting a little dirty. She loved dancing, bananas, arranging flowers, anything lemon, the color blue, birds (especially bluebirds), writing poems, crossword puzzles, laughing, making and serving beautiful hors d’oeuvres, calligraphy, reading mysteries, clam chowder, tomato sandwiches and collecting postcards and books. She also loved growing up near Roger Williams Park and the Natural History Museum where she enjoyed spending lots of time as a young girl. She was a naturalist and her favorite thing was to watch the birds and wildlife in her garden with a nice cup of tea. She will be missed dearly.

Nancy is survived by two children, Susan Merriam and her husband, Terry Jones, and Paul Merriam and his wife, Lindsey Merriam; and one granddaughter, Lucy Clara Merriam Jones. She was predeceased by her sister Margaret Moore.

In lieu of flowers, the family requests memorial donations be sent to New England Wireless & Steam Museum in East Greenwich.