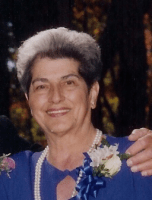 Mary J. (Moretti) Marden, 99, of East Greenwich, passed peacefully from this life on August 3, surrounded by her loving family, just seven days before her 100 birthday. Born on August 10, 1914 in Cranston, she was the daughter of Giovanni and Philomena (Grossi) Moretti.
She was married to Ralph E. Marden on August 29, 1942, a union that lasted 70 years, until his death in 2013. Together they raised six children, including two sets of twins. Mary was employed in earlier years at Jigger’s Diner and retired from Kent Pharmacy. Her home and family were her main interest.
She is survived by her children Barbara A. Bluto, Ralph V. Marden, Carol M. Chasse, David M. Marden, Linda J. Cummings (Steven) and Marcia J. Rogers (William), 19 grandchildren, 32 great grandchildren, two great-great grandchildren and a sister-in-law, Claire Moretti. She also leaves several nieces, nephews, and their children. Mary was pre-deceased by her brothers Joseph, Victor, Anthony and John Moretti.
Mary was a beloved mother, grandmother and friend. Her stable and loving presence brought light to all she touched. She will be sorely missed by all who were fortunate enough to have had her enter their lives.
A Mass of Christian Burial will be celebrated Thursday, Aug. 7, at 10 a.m. at Our Lady of Mercy Church, 65 Third St., East Greenwich. Burial will be in Rhode Island Veterans Cemetery, Exeter. Calling hours are Wednesday, 6 to 8 p.m. at the Hill Funeral Home, 822 Main St., East Greenwich. In lieu of flowers, donations may be made to Meeting Street School.
Visit the online condolence page here.