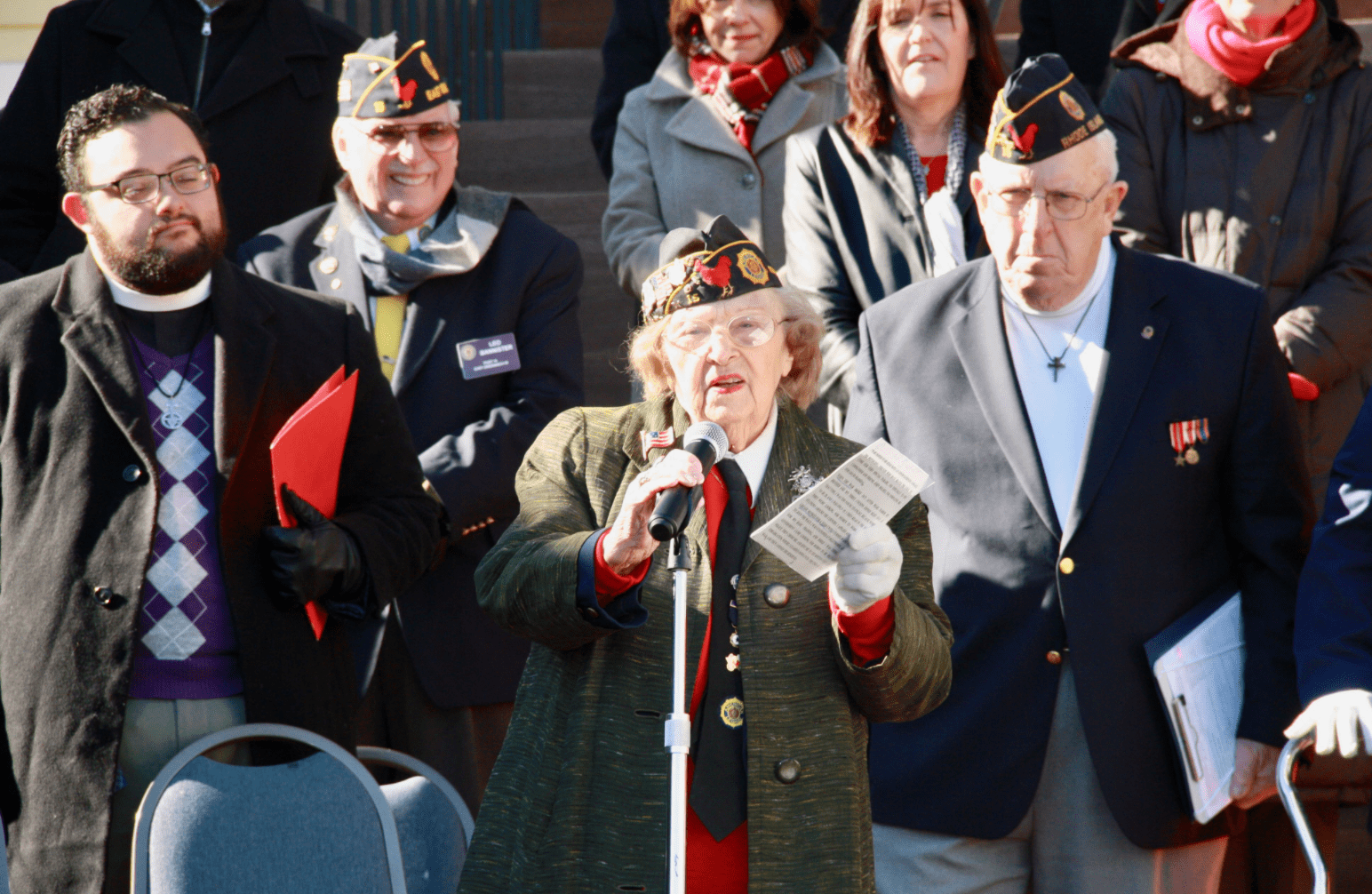 Above: Lucy Amat speaking at the 2017 Veterans Day Parade, where she served as grand marshal.

Lucy was born in New Bedford, Mass., on June 21, 1924, to Laurianna (Simmons/Arruda) and Umberto D’Angelos. Her parents divorced while she was still young, but she considered the time that followed an adventure – sometimes she and her brother, Frankie, were in Providence, sometimes they were on Long Island. Going back and forth like that was fun, Lucy said later.

She always sang, with a voice like sweet caramel, and had dreams of being a singer in New York. Her opportunity to sing on the variety radio show “Camel Caravan” was quashed by her father, who thought New York was too “dangerous” for a young woman and show business was “corrupting.”

But she was a beautiful singer and performer and those talents would shine through later in her life.

Lucy was a brilliant roller skater too. Again, she nurtured her adventurous spirit by playing in the roller derby until her mother made her quit because it was considered (again!) too “dangerous.”

But her sense of adventure and fearlessness was matched only by her patriotism. Longing to serve her country, Lucy waited until she was old enough to follow her brother Franky into the service. As soon as she was old enough she joined the newly formed Women’s Army Corps where she was part of the largest group of WAC rookies to leave New England. Lucy was a member of the military police, guarding the base and Italian and German prisoners at the Boston Port of Embarkation. She earned the WAC Service, American Campaign, and WWII Victory Medals.

When the war ended, she joined the Army Reserves until she married and had her first child, Priscilla. She continued exploring different careers, becoming a hairdresser, attending Airline School (where she was part of a vocal quartet, of course), and working at General Electric.

Eventually she divorced her first husband, remarried and had the rest of her children, always continuing to work, lastly at National Chain, retiring in 1984. In her 50s, single again with five children, Lucy had a friend who introduced her to the American Legion (Post 15). It changed her life and she was thrilled to be able to be back in service. She was a member for the rest of her life.

“She’s with the Lord now and I’m going to miss her tremendously. I loved that lady. She was just a wonderful, caring person.” – John Holmes, commander, American Legion Post 15

She had multiple adventures with her fellow servicewomen, attending conferences and finding an amazing community. She was elected historian and chaplain for American Legion Post 15 in East Greenwich 29 years ago, and she presided over almost 80 funerals, and  participated in multiple parades, eventually giving the prayers at these events.

One of Lucy’s highest honors and most incredible life experiences was to be on the very first Rhode Island Honor Flight, where she was the only female veteran. Second only to that was her visit to the National Women’s Memorial, where she was presented with a personal portfolio of her full military record.

In 2017 she was honored as the Grand Marshal for the East Greenwich Veterans Day Parade, where she was side by side with Gov. Gina Raimondo on the viewing stand. It was a cold day and many other parades had been cancelled due to the cold but not in East Greenwich and not with Lucy as grand marshal. She had many other proclamations and honors, but she especially loved her work in veterans advocacy, education in schools, and special events at Legion Post 15 for the Rhode Island Veterans Home in Bristol.

“I always looked forward to seeing Lucy on parade day with her bright red lipstick and big beautiful smile. The sense of pride she had for her country and for her American Legion family was palpable. When she provided the benediction at the closing ceremonies for our parades, her words were powerful and came from deep within her heart. I was fortunate enough to hear her sing on occasion and every note was filled with joy and love. That’s how she lived … always giving of herself to others. She was larger than life and I will miss her so very much. Live Love Lucy!” – Leigh Carney, EG Town Clerk and Parade Organizer

Lucy was first and foremost a singer, and she became known as The Karaoke Queen! She was resistant to singing again at first, but once she started singing, it became the central focus to her life. When Lucy restarted her pipes, it was magic. Even as she got older, her power to entertain and perform never waned. Her karaoke family grew and grew, and their love for her was only matched by her love for them.

Before COVID isolation hit, Lucy could be found at her favorite karaoke places such as Legion Post 15, The Elks in Coventry, Mr. Biggs, and The Joint, usually singing anywhere from three to five nights a week. She had more energy than most people half her age, or maybe even younger. Karaoke, dancing and socializing were her life force and it was in her nature to gather people up and get them living!

But her first pride was her children. Through good and bad she protected them, without judgment, supported them, and was always there to share their joys and accomplishments, to listen and above all else, to love.

Whether it was through her family, her legion work, or her karaoke life, Lucy inspired so many people, gave so much love, and had incredible wisdom to give. She had so much more to do, and up until her death, fought to stay alive for the next adventure. Well, she is on her next adventure now, and we hope there is karaoke in heaven. Knowing her, if it’s not there, she’ll create it, getting everyone up and dancing!

She was also predeceased by her brother, Francisco D’Angelos, and survived by her nephew Stephen D’Angelos (Olivia), 11 grandchildren, including her best pal and confidante Pamela Gulotti, and 2 great grandchildren.

She also leaves loving friends, “daughters” Diane Bruckschen Gardner, Kathy Miller, Carol Belmore, Kathleen, Carmen Nobile, and “Son” Bob “Big-Bopper” Barra, and Jim Mitchell, Leo Bannister, Mary and Richard Filion, Skip Davis, Billy and Barry, and all her loved ones at Legion Post 15, and her karaoke community, without whom she would not have lived such a wonderful life. We are forever grateful.

You can leave a tribute at the Olson & Parent Funeral Home website HERE. In lieu of flowers please consider donating to: The American Legion Children and Youth Foundation, RIFC Honor Flight Hub, or The Women In Military Service For America Memorial.