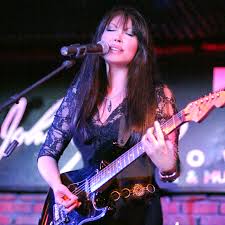 Lois Greco died peacefully March 2, in her brother’s home. She was the daughter of Etta and Earl Greco. After earning a degree in Theater from URI Lois moved to NYC where she was cast as the lead in the national tour of Grease and also performed the lead role on Broadway. After realizing her true passion was singing she moved to Boston, performing and taking classes at Berklee. She then moved to LA to further pursue singing and found acting work including Days of Our Lives and General Hospital. Lois later moved back to RI to be closer to her family while continuing to perform and record with the Lois Greco Band and her bassist brother and lifelong musical collaborator Earl Greco. Among her many accomplishments Lois won the “Most Outstanding Female Singer Award” in the “Blues Audience Readers Poll” and “The Lois Greco Band” was voted “Best Blues/R&B Act” in the 2014 WMRC Music Awards.

She was a devoted daughter to her late mother Antonetta Greco and surviving father Earl Greco, sister to Earl Greco, Jr. and sister in law Kristen Greco; as well as loving aunt to Sara & Michael; and a loving girlfriend to Lou Shames. She was forever grateful to her loyal fans and devoted band mates.