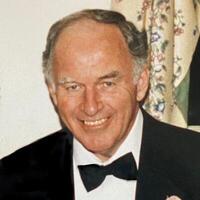 Leo was the loving father of Linda Willse, Jennifer (Timothy) Sharkey, Melanie (Joseph Quackenbush) Smith and Leo F. Smith III and his late wife, Maureen, whom he loved dearly. He delighted in and was so very proud of his seven grandchildren: Dr. Cadence (Simon Freyaldenhoven) Willse; Nathan Willse; Jacob, Kathryn, and Joseph Sharkey; Emily Smith; and Henry Quackenbush. His great-granddaughter Claire Freyaldenhoven was a joy to him and Arlene.

Leo was an executive in the banking business, including People’s Bank of Providence and North Conway Bank of New Hampshire. He later owned and operated Northstar Financial Services of East Greenwich.

A graduate of La Salle Academy and Providence College, with post-graduate studies in banking at Brown University, he served as an officer in the United States Marine Corps. Leo served on several Boards of Directors, most notably as Treasurer of the YMCA of Providence and the Brandt Point Association of Nantucket. Salve Regina’s Circle of Scholars and The Cursillo were great joys in his retirement.