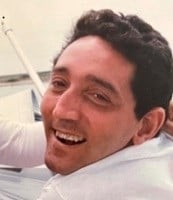 Lawrence ” Larry ” Kirk, 67, formerly of Cranston, passed away at St. Elizabeth’s Greenhouse 15 in East Greenwich, on Saturday, June 19. Born in Providence, he was the son of the late Kenneth L. and Marie V. (Arbolino) Kirk. Larry was disabled from birth, but with the help of his parents and siblings, Larry lived a long and happy life.

In his early years he attended the original Meeting Street School. Then, at the age of 5, Larry attended the Joseph P. Kennedy Jr. Memorial Hospital in Brighton, Mass. which met the needs of children with physical disabilities. In his time there, Larry made his First Communion and received the Sacrament of Confirmation. In his teen years, Larry attended the Cranston Center on Dyer Ave, participated in the Rhode Island Special Olympics, and even traveled to Texas to participate in the Games. Over the years, Larry (with the help of his parents) participated in many United Cerebral Palsy (UCP) telethons.

Ken and Marie’s constant pursuit for Larry to live a meaningful life led to many great adventures including being co-captain on his father’s boat, sitting co-pilot next to Rick in their Cessna 172, and even traveling to Rome where he had the great honor of meeting and shaking hands with Pope John Paul II.

Ken and Marie bought him a house on Centerville Road, Warwick so he could live independently, which would not have been possible without the help of his aides. While living there, he worked at Amtrol in West Warwick, where his “job” was socializing. From there, he moved to his own home in Port Orange, Fla., to be closer to his parents and brother, Rick, and Rick’s family. He lived there for 20 years being cared for by his aides, many of whom remained close to him to this day, before he moved back to Rhode Island in 2017, where he lived and received tremendous care at St. Elizabeth’s.

Larry was an inspiration to all that knew and loved him and proof that no matter what challenges life hands you, with love and hope, you can persevere. He will be missed by all that knew him.
A mass of Christian Burial will be celebrated Monday, June 28, at 11:00 AM at St. Mary’s Catholic Church in Cranston. Burial will follow in St. Ann Cemetery. Family and friends may call from 9:00 to 10:00 AM on the morning of the Funeral Mass in the Russell J. Boyle and Son Funeral Home in Warwick.

In lieu of flowers, donations in Larry’s memory may be made to Independence Square Foundation, 500 Prospect Street, Pawtucket, RI 02860. The foundation was established by Larry’s father, Kenneth Kirk, in 1983.