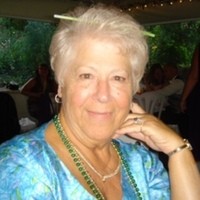 Josephine Grace DeVoll, 90, passed away peacefully at her East Greenwich home with her daughters at her side on Tuesday, May 18.  Born in Providence on November 22, 1930, Jo was the daughter of the late Luigi and Maria Amitrano, and the last of their 12 children, Teresa, Susan (Asunta) Greh, Frank, Concetta, Vito, Madeline, Nicholas, Mary Steinbrink, Angelina, John, and Liberine Keedy, to pass to their next life.  In addition to her parents and siblings, Jo was predeceased by her grandson, Dianne’s son, Korey Aldrich (1985-2019) and her husband, Marvin Willard DeVoll (1932-2003).

Jo was a graduate of Mount Pleasant High School.  She briefly joined the United States Marine Corps, but left to marry Marvin DeVoll of Madelia, Minnesota, and they had 47 years of adventure together during Marv’s career as as an Aviator in the United States Navy. They moved overseas, coast to coast, and in-between before returning to Rhode Island in 1974, for retirement. They had three daughters together. Jo worked at Naval Underwater Systems Center Newport as a disbursing clerk until she retired in 1988. In retirement, Jo volunteered at the East Greenwich Senior Center, and attended St. Francis de Sales Church in North Kingstown. She loved loved going with her husband to Jai-Alai in Newport and the casinos in Connecticut, challenging the slots and seeing the shows.

Jo leaves behind her three daughters, Dianne DeVoll, of East Greenwich; Debbie Robertson and her husband, David, of North Kingstown; Jeanne Roccapriore and her husband, Ric, of Los Angeles, California.

A treasured “Gramma,” she also leaves behind also Dianne’s daughter, Chelsea Hudock and her husband, Tyler, of West Kingston, and Debbie’s daughter, Jackie Morin, of Coventry.  The best “GramDooda” for hugs and kisses, she also leaves behind three great- grandsons, Shawn Morin (10), and Finley (7) and Duncan (2) Hudock. She was loved dearly by many nieces and nephews and as well as her neighbors of many years.

A Mass of Christian Burial will be celebrated on Thursday June 10 at 11:00 AM at St. Francis de Sales Church in North Kingstown. Visitation will be held prior to mass from 9:30 AM -10:30 AM at Hill Funeral Home in East Greenwich. Burial will be in the Rhode Island Veterans Cemetery where she will be interred with her husband.

An online condolence may be left at the funeral home HERE.