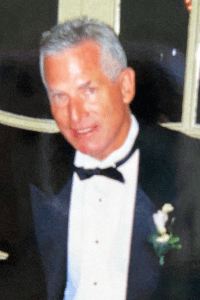 Joseph W. Taylor, 74, of Brisas Circle, passed away on Sunday March 14, surrounded by his family in the St. Elizabeth Home. He was the beloved husband of Barbara J. (DeCubellis) Taylor. They had been married for 49 years.

Born in Providence, a son of the late Lawrence J. and Anna R. (O’Connor) Taylor. He had lived in East Greenwich for 15 years, previously living in North Kingstown.

Joseph was a US Army Veteran. He had been a Splicer with Verizon for 30 plus years before he retired. Joe was a hard worker in all that he did. He took great pride in his work and a job well done. Joe was a good Christian and had a sound moral compass. All of these qualities he passed onto his children.

He loved all things military, immaculate cars, good food and good music, Dunkin’ Donut runs with his devoted childhood friend, Dick Bose, and a nice cold Rolling Rock in the green bottles on a hot summer day. Those that knew him knew he always took pride in his Mustangs.

He had served as Junior Warden at the Chapel of St. John the Divine and as President of the Board of Governors at The Plum Beach Club, both in Saunderstown. He was a brave participant in Dr. Stephen Salloway’s clinical trials in a quest to find a cure for Alzheimer’s disease.

Besides his loving wife, he leaves his devoted children and grandchildren, Detective Christopher J. Taylor, Smithfield PD, and his wife, Randi, and their children, Natalia Mae and Kaiden Joseph of Smithfield; Alisa Taylor-Kapoor and her husband, Al, and their sons, Axel, Ace, and Avant of Weston, MA; and Zachary Taylor, of East Greenwich. He also leaves his sister, Mary -Lou Correia, and her husband, Dennis, of Tucson, AZ, and many nieces and nephews. He also leaves behind his grand-dogs, Peach and Simba. Joe was the brother-in-law of Jerrel Taylor of Clyde, NC, and brother of the late Lawrence J. Taylor, Jr.

A private funeral service with military honors was held in the RI Veteran’s Cemetery, Exeter, RI. A celebration of Joe’s life will be held later this summer. If desired, donations in his memory may be made to the St. Elizabeth Home, Attention: The Cove, 1 St. Elizabeth Way, East Greenwich, RI 02818 or HopeHealth Hospice and Palliative Care, 1085 North Main Street, Providence, RI 02904.