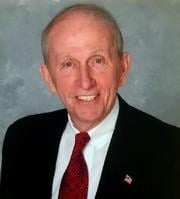 Quirk, John F. (Jack), 87, of East Greenwich, formerly of North Providence and Providence, passed away peacefully Dec. 13. He was the beloved husband of Jacqueline (Rondeau) Quirk for 61 years.

Born in the Smith Hill section of Providence to Irish immigrant parents, Daniel J. Quirk and Nora (Casey) Quirk, Jack graduated from St. Patrick’s School in 1947 and LaSalle Academy in 1950. He served in the U.S. Army during the Korean Conflict, obtaining the rank of Corporal and earning the Korean Service Medal, the United Nations Service Medal, and the National Defense Service Medal.

Following his discharge from the Army in 1954, Jack joined the Providence Fire Department, where he served with distinction for 32 years, ultimately obtaining the rank of Battalion Chief. Early in his career in the fire department, he also worked for the Rhode Island Chapter of the National Multiple Sclerosis Society and later began selling real estate for DeFelice Realtors. Upon his retirement from the fire department in 1986, Jack turned his focus to real estate. He formed Jack Quirk Realtors in 1987, where he served as President and CEO until May 2002. He later worked for RE/MAX in North Providence until his retirement in October 2010.

A longtime communicant at St. Augustine Catholic Church in Providence, Jack was very involved in parish life, orchestrating fundraisers, serving as parish council president, and coaching CYO basketball. For the past 21 years, Jack had been an active member of Our Lady of Mercy in East Greenwich.

Jack enjoyed success rising through the ranks of the fire department and excelling in his real estate career. Jack worked tirelessly, was always prepared, and never cut corners—”sharpen your pencil,” he liked to say. Despite his many successes, he never forgot his humble roots on Smith Hill and those who helped him along the way. Jack served as a mentor to many people throughout his life, including to young firefighters in whose careers he took great pride and to his children and grandchildren. His impact on so many people has been immeasurable.

Jack loved to tell a good story and seemed to have a story for everything—every house he sold, every fire he responded to, every Celtics game he watched. He loved playing and watching all sports. He played softball and basketball in his younger days, and he played golf into his 80s. He was a longtime season ticket holder of the Providence College Friars basketball team. Jack and Jackie traveled the world together and enjoyed time spent with their family and dear friends. He loved good food, especially a meal at the famous Twin Oaks, where they always had a booth waiting for him. Jack will be missed by everyone who knew him.

Besides his wife Jacqueline, Jack is survived by his daughter Sharon Quirk Capuano and her husband Paul Capuano of East Greenwich, and two sons, Michael J. Quirk of East Greenwich, and Dr. Daniel M. Quirk and his wife Dr. Catherine Quirk of Wayne, Penn. He is also survived by seven grandchildren: Marc, Christopher, and Benjamin Capuano, and Margaret, Cecilia, Grace, and Caroline Quirk. He is predeceased by his parents, Daniel J. Quirk and Nora (Casey) Quirk, and two brothers, Dr. Daniel J. Quirk, Jr. and William J. Quirk.

Visitation will be held on Tuesday, December 22nd beginning at 9 a.m. at Our Lady of the Rosary Church, 21 Traverse St., Providence, followed by a Mass of Christian Burial at 10 a.m. Due to COVID, seating in the church will be limited and masks must be worn. A live stream of the Mass will be available on the Our Lady of the Rosary Church Facebook page. Burial will be private. A memorial Mass in Jack’s honor will be held at a later date. In lieu of flowers, please consider donating to the Jack Quirk Scholarship Fund at LaSalle Academy, 612 Academy Ave., Providence, RI