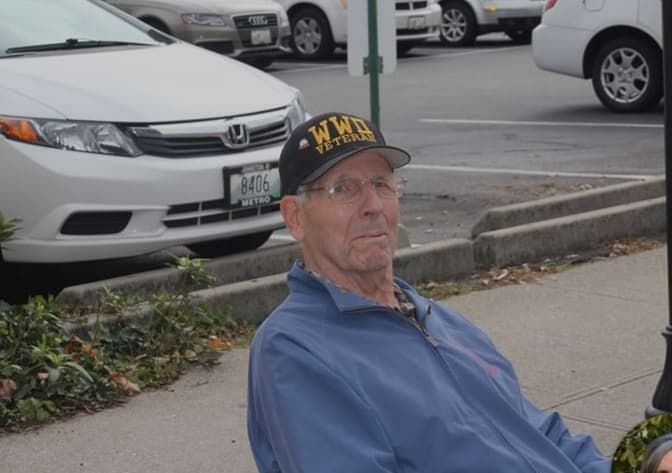 He was the husband of Barbara P. (Rayhill) Anderson. Born on the corner of First Avenue and Main Street in East Greenwich, he was a son of the late Ivar and Ingrid (Algren) Anderson.

Besides his wife, he is survived by his daughters,

Anderson and her husband Ronald Sarro, Jody Wilkett and her husband Dwayne and Bonnie J. Anderson; step children, Joseph and Anthony Salema; siblings, Marjorie Cookson and Robert Anderson; 10 grandchildren, 7 great grandchildren and 1 great grandchild. He was the father of the late John F. Anderson, Jr. and the brother of the late Clinton and Raymond Anderson, Muriel Johnson, Marguerite Carcieri and Mary Ann Drake.

Mr. Anderson was a retired machinist having worked at Bostich and a WWII Army Veteran.

He joined the U.S. Army at age 19 in 1943 and served as a corporal in both North Africa and Europe during World War II with the Battery B 112 Anti-Aircraft Artillery Battalion.

After the war, he returned to East Greenwich and worked as a machinist at Bostitch for more than 30 years. He also played on the town football and basketball teams.

Six years ago, daughter Bonnie found a bunch of papers dating back to WWII, mentioning the various medals he was awarded during his time in the Army. She asked him where the medals were and he said he’d never received them. With Sen. Jack Reed’s help, the medals were finally bestowed on John in a ceremony in May 2014, when John was 90 years old.

His funeral will be private. Donations in his memory may be made to the Wounded Warrior Project, www.woundedwarriorproject.org. Visit Hill Funeral Home’s website HERE for full obituary and online condolences.