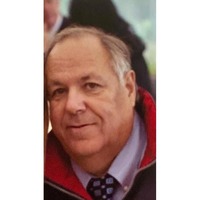 John D’Ellena, 68, passed away peacefully at home surrounded by family and friends on Sept. 6.

He was the late son of John V. D’Ellena and Ida D’Ellena.

He is survived by his wife, Kim D’Ellena and his daughter Rachel D’Ellena; his brother Carmine D’Ellena and sister-in-law Michele D’Ellena along with many nieces, and nephews.

John was born in Providence on June 19, 1952, but soon after moved to East Greenwich where he lived most of his life. He graduated from Roger Williams University with a degree in business and immediately after joined the police academy working for North Kingstown Police Department. John did so many things throughout his life including being an avid baseball player, and owning and teaching in his own karate studio.

Owning a private plane and learning to pilot it to Block Island and Martha’s Vineyard with friends was just another one of John’s passions. Another huge part of his life was owning restaurants with his brother, which is where he met his wife. Soon after, they started the American race truck series and spent any spare time racing stock cars in Waterford, CT.

John had a charming personality that led him to be an extremely successful real estate agent across all of Rhode Island. He was celebrated many times and highly decorated for his work in the field.

John will be remembered as a person who was bigger than life, irreverent in a way that was endearing and loved by everyone that met him.   John truly enriched the lives of anyone he touched and left an indelible mark that will be remembered always and missed forever.  John loved all of his animals, and often advocated for animals, including adopting homeless animals.

Hands down John’s best and favorite job was being a dad. He loved going to every barrel race and cheering his daughter on. He moved to his family farm in 2018 where he enjoyed spending every day with the horses and cow, watching his daughter ride, watering the garden, spending time with his dogs and most importantly sitting under his favorite tree with friends.

John had a strong passion for animals, therefore a donation to:  The Warrior Dog Foundation, 5930 Royal Lane Suite E # 355, Dallas TX 75230 would be appreciated.

Due to current health and safety regulations his funeral will be private.  A celebration of his life will be held at a later date.  Further information will be furnished by the family.