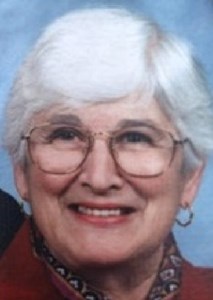 Joan (Beck) Banisch, 91, died peacefully at Saint Elizabeth Greenhouse Home on September 15. She was born in Scranton, PA on December 28, 1930. The eldest of three children born to the late John H. Beck and Paula (Carrano) Beck Anderson, she was predeceased by her brother Norman J. Beck and her sister, Carol Beck Pagnozzi.

She met Francis J. Banisch in high school. He became the love of her life and they set the foundation upon which they would build their family. They were married for 63 years prior to his death in 2011. Joan is survived by her children Francis III (Diane), Tom (Eileen), Mary Ellen (Scott Welch), David, and Claire Flaherty (Bob), and her sister-in-law, Ann Beck. Joan was blessed with many loving grandchildren, including Rachael, Sean and Christopher Banisch, Cara (Banisch) O’Donnell, Matthew and Andrew Banisch, and Jennifer, Veronica, Austin and Brigid Flaherty. She was predeceased by her infant granddaughter, Kathryn Banisch. She was blessed by the arrival of her great-grandchildren, Sami and Nayla Derif, Katie and Caroline O’Donnell, and Madison and Jack Banisch.

First and foremost a wife and mother, as her family grew so did her interests. Her entrepreneurial talents led to her selling real estate and Avon products. Her artistic ability was expressed through painting pictures, creating mosaics and a variety of craft projects around the house. She had a flair for decorating and used her eye and sewing skills to create a fashionable and comfortable home for her husband and family. She was an accomplished bowler, a competitive travel tennis player representing Centre Court Tennis Club, and enjoyed playing in a regular tennis group with her favorite mixed doubles partner, Frank. Joan was also an avid golfer.

Joan and Frank loved to travel. Whether it be for a week on their beloved Long Beach Island in NJ, sailing trips in the Caribbean or frequent trips to Bermuda, Florida, California, and Hawaii, they always had fun because they were together.

Joan was involved in many religious and community groups. A convert to Catholicism, she was a faithful and active parishioner of St. Luke’s Parish from 1970 until she moved to East Greenwich in 2019. She and Frank were faithful in their Novena devotion and raised their children in the faith. Through her volunteer efforts with Meals on Wheels, Tap In, and The Barrington Women’s Club, she instilled in her children a sense of responsibility to be involved in making our community and world a better place.

Mom will be missed. She was the glue that held us together. Whether keeping us in line while Dad was at work or correcting our grammar and etiquette at the dinner table, ultimately, she was the encouragement that we each needed to be successful in life.

Donations may be made in her name to Saint Elizabeth Community, 2364 Post Road, Suite 100, Warwick, RI 02886 or Catholic Charity Fund Appeal, One Cathedral Square, Providence, RI 02903.