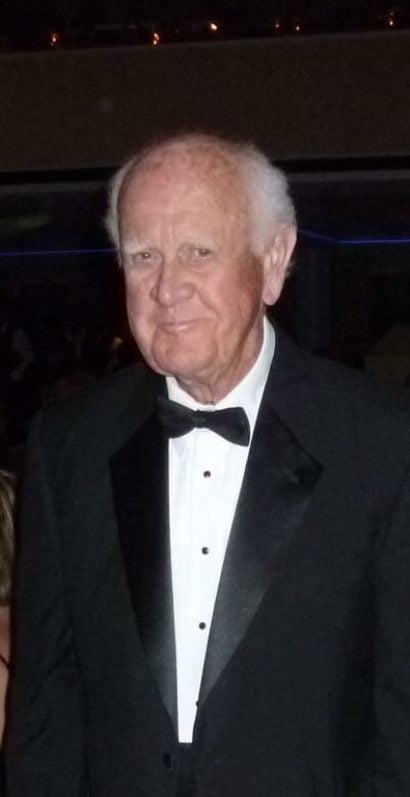 James Edward Dyer passed away peacefully at his home in Englewood, Florida, on January 6, 2021, at the age of 95. He was the devoted husband of the late Virginia (Foehr) Dyer and Carol (Williams) Dyer of Englewood.

Dad was truly a member of ‘the Greatest Generation.’  Born on September 23, 1925, he often liked to say he lived in amazing times.

As a young child his family experienced the extreme hardships of the Great Depression. Their home in Warwick, Rhode Island, had a dirt floor, a kerosene stove for heat and cooking, and no running water.  Some days there was no food to eat.

He had completed three years of high school when the Second World War broke out.

At the age of eighteen, Dad was drafted into the Navy. His vision was excellent, so he was sent to gunnery school.  He was assigned to be a turret gunner on the TBM Avenger torpedo plane (the same plane flown by President George H.W. Bush). He served on several aircraft carriers, hunting for enemy submarines in the Atlantic and Pacific from 1943 until the end of the war.

As the war was coming to an end, what remained of his air squadron was stationed on the island of Saipan. Fleets of B-29 bombers flew overhead night and day on their way to Japan. In the final days of the war, he watched a single B-29 takeoff, with hundreds of fighters escorting it. It was the Enola Gay, on its way to drop the first atomic bomb on Japan. This was one of the very few stories Dad would share about his war experiences.

After returning home, Dad pursued a teaching degree at Rhode Island College.  It was there he met Mom and swept her off her feet. Dad graduated first with his teaching degree. Mom’s parents were not in favor of marriage, so one workday Mom packed her wedding dress in her lunch bag. On her lunch break from work, Mom and Dad were married by a Justice of the Peace and Mom returned to work.

They lived a happy life together, with their children, Shelly and Kevin, and many relatives and friends. Dad went on to teach history, geography, math and science at East Greenwich High School. He later earned a master’s degree and became a Guidance Counselor in North Kingston. Mom taught second grade in Warwick. Summers were a time of celebration. They enjoyed traveling all across America. and to Europe, Bermuda and other faraway places. They retired in 1985, and followed their dream to move to Florida. Shortly after arriving in Englewood, Mom was diagnosed with cancer. She passed away on November 24, 1986.

In 1988, Dad met and married Carol Dyer (Williams) of Englewood, Florida, where they resided for more than thirty years.

Until his last days, Dad continued to practice his love of teaching. Once he met you, he was deeply curious to know what you were all about, and how life was treating you. He was eager for you to live the best life you possibly could live; to that end, he would share encouragement and his ’wisdom earned from a long life.’

James Dyer was predeceased by his brother, Vernon Jones, and sister, Elsie Doran. He is survived by Carol Dyer, his daughter, Shelly (Robert) Norby, his son, Kevin (Judy) Dyer, his grandchildren: Maxwell Dyer, Elissa Neill, Vanessa Fontana and Dominic Fontana, and by many great-grandchildren.