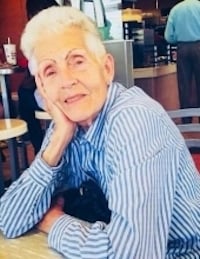 Jacqueline Leda Bernadette (Prince) Pugliano Ott, age 89 of East Greenwich, passed away peacefully on Saturday, Sept. 24, surrounded by the love of her family. Born in Leominster, Mass. on May 25, 1933, she was the daughter of the late Alfred and Alice Prince. She was the beloved wife of the late Ralph J. Pugliano, who died in 1991, and Arpad Ott, who died in 2008.

Family was the center of Jackie’s life. She was an incredibly devoted mother to her seven children and was “Mom” to children of countless friends and neighbors. If you were in Jackie’s home, you were welcomed as part of her family and would be fed. Jackie had a magnetic personality; there wasn’t anyone that didn’t fall in love with her. Talking to people was one of Jackie’s favorite things to do. In fact, she even flunked 2nd grade because she talked so much. While working as a cashier at Stop & Shop, customers would wait in longer lines simply to have their days brightened by a conversation with Jackie, which she took great pride in. To know Jackie was to know her “Jackie-isms,” such as “If you don’t have patience, you’ll become one.” She was always the life of the party and kept her family full of laughter. With a steadfast faith, she was the quintessential personification of all that was good in life. Whether you knew her as Mom, Funny Gramma, Cracky Jackie, GG, or just Jackie, she brought light to the lives of everyone and will be deeply missed.

Jackie was the cherished mother of seven children: Catherine Baker (Regina) of Exeter; Michael Pugliano (Wendy) of St. George, Utah; Deb D’Amico (Tom) of Bluffton, S.C.; Teresa Rochette (Jeff) Woodstock Valley, Conn.; Linda Hunold (George) of North Kingstown; Annamaria Apice (Dave) of Coventry; and Jimmy Pugliano (Lil’ Papi and Beanie Boy) of East Greenwich; 16 grandchildren, and 10 great-grandchildren and two on the way (one of which will be named Jacquelyn). She was preceded in death by her brothers Paul and Robert Prince; and her step-daughter Karen Drum.

Visitation will be on Friday, Oct. 7, from 4 to 7 p.m. at Carpenter-Jenks Funeral Home in West Warwick. A funeral service will be held on Saturday, Oct. 8, at 12 p.m. at the funeral home.

In lieu of flowers, the family requests memorial donations be made to Beacon Hospice, 1 Catamore Blvd., East Providence, R.I. 02914.