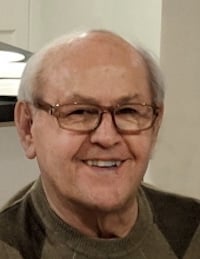 Herman A. Paolucci 90, passed away peacefully on January 3. He was the loving husband of Yolanda J. (D’Abrosca) Paolucci, having been married for 63 years. Born in Warwick (Hillsgrove), he was the son of the late Paul and Carmella (Carano) Paolucci.

Herman proudly served in the United States Navy during the Korean Conflict. He received an Associates Degree in Business from Johnson and Wales University. Herman was a server for 19 years prior to purchasing The Cowesett Inn in 1977, retiring in 2018. He was an avid sports fan and loved to golf.

His funeral will be held on Monday, January 9, at 8:45 a.m. from the Carpenter Jenks Funeral Home in West Warwick with a Mass of Christian Burial at 10:00 a.m. at St. Gregory the Great Church in Warwick. Burial with Military Honors will be held at the Rhode Island Veterans Memorial Cemetery in Exeter. Visitation will be Sunday, January 8, from 4:00 to 7:00 p.m.

In lieu of flowers, donations may be made in Herman’s name to Alzheimer’s Association, 245 Waterman Street, Providence, RI 02906.

An online condolence may be let with the Carpenter-Jenks Funeral Home HERE.