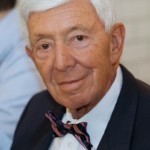 Herbert “Herb” Fogel, 79, of Narragansett, Rhode Island and Delray Beach, Florida, passed away on Monday, May 31, after suffering with Parkinson’s Disease. He was the husband of Judith (Jacobson) Fogel for almost 50 years.

Born in Cranston, Herb was the son of the late Joseph and Lillian (Wine) Fogel.  He grew up in East Greenwich and was a proud graduate of the Class of 1959. He attended Bryant College and served in the Army for 2 years, before joining the family business, Brown Tailors and Cleaners in East Greenwich, where he worked for 34 years before retiring in 2000. It was truly a family business, working side by side with his parents, wife, and children, proudly serving the needs of the town and its many residents.

Herb’s brother, Bruce, instilled in him the love of travel and with his wife by his side, Herb, told everyone that he visited and toured 6 continents and over 80 countries! Travel however, took second place to his family, the loves of his life. He was always available to them and continuously bragged about his children and grandchildren. He taught them to have a strong work ethic and a love of life. His mantra was, “It is nice to be important, but it’s more important to be nice!”

Herb was a loyal and true friend. He never had a bad word to say about anyone. To Herb, friends were like family; you nurtured and cared for them. Among his friends were many he had known since kindergarten. He was in gourmet dinner group for over 20 years, a theater group for over 25 years, and Florida friends for more than 20 years.

Herb was the beloved father of Jenny Miller (Craig Koehler) of Warwick, Jared Fogel (Kelly) of Rehoboth, Mass., and Molly Fisher (John) of New York City. He was “Poppy” to Lucy and Lily Miller, Jax and Drew Fogel, and Jack Fisher.

Services were held June 2 at Temple Beth-El in Providence.

In lieu of flowers, contributions in his memory can be made to the East Greenwich Free Library, or to the charity of your choice.