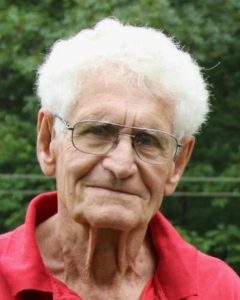 Henry Howard Graham, Jr., 90, passed away on January 17, at his home in Wood River Junction in Richmond.

Born January 26th, 1931, he was the beloved son of the late Henry and Anna (Miller) Graham. Henry was born and raised in East Greenwich, joined the Army National Guard in 1948, and was called into service during the Korean Conflict in 1950. He began his professional career as a draftsman in 1953 at Electric Boat in Groton, CT, the company where he subsequently worked for the next 43 years before retiring as a Senior Designer in 1996.

A boater in his younger years, single parent in the middle years, and grandfather and gardener in his later years. He would spend countless hours in his garden tending to vegetables he never intended to eat, but rather to give to family and friends. In part, he measured his gardens success in pounds per year – hundreds of pounds.

Henry would often say that his home on Switch Road was the best lot in the state and he wouldn’t trade it for any other. And he never did, having lived there for over 50 years. He served his town with dedication on Richmond’s Zoning Board of Review for 37 years, delivered Meal on Wheels, and was active in the Senior Center.

In lieu of flowers, condolences can be made in Henry’s memory to the Town of Richmond Senior Center 1168 Main St. 2nd Floor Wyoming, RI 02898).