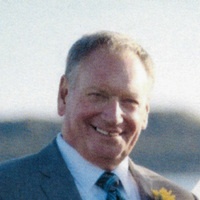 Gregory Lamoreaux, 68, of East Greenwich, lost his tough battle with esophageal cancer and passed away on Nov. 21. He was a devoted husband of 38 years to his wife Nancy.

Born in Pennsylvania, he was the son of the late Willard & LuVere Lamoreaux. He was a 1972 graduate of the University Delaware with a degree in Business Administration. He was an active member of the Men’s Division 1 Swim Team and founding member of WVUD radio station, which is still active today. A committed volunteer and proud alumnus, he was recognized for his services to the University and was awarded the Outstanding Alumni Award in 2011.

Greg started his career at Sears in New Jersey where he met his wife, Nancy. His career brought family moves to Illinois, Connecticut, and finally Rhode Island where he worked as a vice president for K&M Associates, a local costume jewelry manufacturer, for the past 24 years. He was a beloved and hardworking coworker.

An accomplished swimmer, his life-long passions always involved the water.  Greg was a permanent fixture in the RI swimming community as a USA Swimming & local NCAA lead referee for Providence College, Brown University, and Roger Williams University.  His stellar reputation and success led him to run multiple championship meets across the country including the Big East and Ivy League.  He was proudly recognized for his commitment to RI Swimming as a 2016 Inductee into the RI Aquatic Hall of Fame.

Greg loved spending his summers poolside as a 20-year board member of the Greenwich Club or beach side boogie boarding waves to the very end at the Jersey Shore and Narragansett Beach. He also enjoyed spending time at their condo in Pompano Beach, Fla. Although an avid Yankees fan, he loved watching local sports, especially “his AFC Team” of the Patriots, and Providence College Friar Basketball. His favorite sport to support though, was anything his two daughters were participating in; from swim meets across the country or a local road race, he was always their biggest cheerleader.

In addition to his wife Nancy, he is survived by his two daughters, Kristina Parry and her husband Eric of Dedham, Mass., and Kelly Lamoreaux of Newport; and his brother Ralph Lamoreaux and wife Leslie of Colorado.