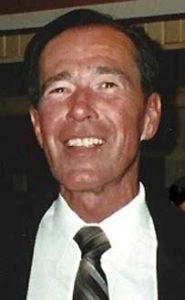 Francis J. “Frank” McCarthy, 78, passed away peacefully on Monday, Sept. 16, surrounded by members of his loving family. He was the beloved life companion of the late Suzanne A. McCaughey. Born in Providence, Frank was the devoted son of the late James F. and Mary E. McCarthy.

Frank honorably served in the U.S. Army and was awarded the “Army Commendation Medal for Meritorious Service” while stationed in Istanbul, Turkey.

Frank was the general manager for the Harbourside Lobstermania for 36 years and Finn’s Harborside for two years until retiring in 2015.

Frank is survived by his brother Robert T. McCarthy (the late Bridget Mary); his niece Maryellen McCarthy; and grandniece Bridget Lenahan of Quincy, Mass.; and his nephews Sean and Michael McCarthy of Dorchester, Mass. He is also survived by his cousins Jeremiah “Jerry” Fain (Donna Geoffroy), Vickie Brisco (Gary); and his godson Jonathan Brisco; as well as many other special relatives.

He leaves his best friends of over 60 years, John and Pat McNally of Warwick, whose friendship meant the world to him.

During his time at the Harbourside, Frank made many friends who he considered his extended “Harbourside Family,” with special mention of Kim Williams, his “adopted sister.” He loved and cherished the time spent with all of you. Everyone who knew Frank admired and loved him. He will be remembered and missed by all of us.

Frank and his family would like to thank Dr. Rana and his oncology team, the nurses in 3-South at Kent Hospital and the staff in the infusion center for their compassionate care.

His Mass of Christian Burial will be celebrated on Saturday, Sept. 21, at 10 a.m. in St. Gregory the Great Church, 360 Cowesett Road, Warwick. Relatives and friends are invited and may call at the Urquhart-Murphy Funeral Home, 800 Greenwich Ave., Warwick, on Friday, Sept. 20, from 4 to 8 p.m. Burial with military honors will take place in St. Ann Cemetery, Cranston.