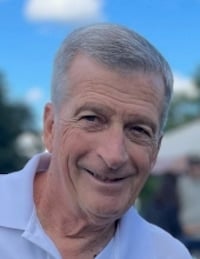 F. Charles “Charlie” Haigh, Jr., 76, passed peacefully on December 22, after a valiant battle with cancer. His wife Denise was a constant support by his side.

Charlie grew up in Cranston and enjoyed a youth full of baseball, work at a young age for a local gas station, and a nascent business of buying and selling cars. He graduated from Cranston High School East in the Class of 1964. Charlie then enlisted in the United States Marine Corps and proudly served for six years. The lessons and principles of the USMC stuck with him and heavily influenced him for the rest of his life. Charlie was honorably discharged as a sergeant E-5 and in 1969, was named “Rhode Island Marine of the Year.”

Following military service, Charlie pursued undergraduate studies at both the Community College of Rhode Island and the University of Rhode Island. He had a long and successful career as a draftsman and deputy building inspector for the City of Cranston, and later as a clerk and finally Administrator Clerk of Rhode Island Family Court.

More recently, Charlie enjoyed the pace of retired life and was able to travel both domestically and internationally with Denise, although no exotic destination could ever match his beloved Bay Ridge community on the shore of Greenwich Bay, where he summered from childhood and lived full time since 1974. The natural beauty and power of the water as well as the close-knit neighborhood brought Charlie much joy. When not enjoying the bay on a boat or from the deck, he could frequently be found bending the ears of neighbors.

Over seven decades of life, Charlie collected friends wherever he went. He was generous to a fault, an enthusiastic storyteller, and a skilled problem solver and handyman. He will be missed by many friends, colleagues and neighbors. Charlie was a devoted husband and father, and perhaps his favorite role was that of grandfather. He is survived by his wife of forty-eight years, Denise (DiPalma) Haigh; daughter and son-in-law, Lindsey and Ray Colligan of Warwick; granddaughter, Caroline Colligan; brother-in-law, Brooke Sykes of Charlotte, NC, and many loving extended family members. He is predeceased by his parents, Frederick Charles Haigh, Sr. and Louisa (Konter) Haigh, and his sister, Barbara (Haigh) Sykes.

His funeral will be held on Thursday, December 29. Visitation will be 8:30 to 10:30 a.m. in the Carpenter Jenks Funeral Home in West Warwick with a Mass of Christian Burial at 11:00 a.m. at Our Lady of Mercy Church in East Greenwich. Burial with Military Honors will be in East Greenwich Cemetery in East Greenwich.