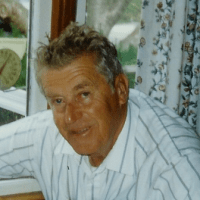 Ellsworth “Ebby” Spencer, 85, of East Greenwich, passed away Feb. 1. He is survived by his beloved wife of 56 years, Joyce A. (Kettelle) Spencer. Born in East Greenwich, he was a son of the late James B. and Helen (Stoddard) Spencer.

Mr. Spencer had worked as a lineman for the former New England Telephone Company, now Verizon Communications, for 40 years. He was an Air Force veteran of the Korean War, had been an East Greenwich Volunteer Fireman, a member of the Telephone Pioneers, the East Greenwich First Baptist Church and the East Greenwich Veteran Fireman’s Association, a train enthusiast and loved animals.He was a loving husband, father and grandfather; a gentle giant. Besides his wife, he is survived by his devoted daughters, Sandra J. Collins and her husband Barry and Cindy L. Rossi and her husband Mickey; and loving grandchildren, Jared and T.J. Henry and Nicole and Kristie Rossi. He was the brother of the late Robert, James and Andrew Spencer, Barbara Nicholson and Avis Gardiner.His funeral service will be Monday, Feb. 9, at 11 a.m. at the Hill Funeral Home, 822 Main St., East Greenwich. Burial with military honors will be in Quidnessett Memorial Cemetery, North Kingstown. Calling hours are Sunday, Feb. 8, from 4 to 7 p.m. In lieu of flowers donations may be made to Friends of the Providence Animal Care & Control Center, 33 Social St., Providence, RI 02904 or the American Heart Association.
The online obituary and condolence page can be found here.