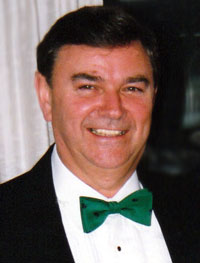 Daniel C. Murphy, 80 of Eagle Run, died Wednesday, Oct. 1, at Kent Hospital, surrounded by his loving family. He was the beloved husband of Catherine M. (Goodwin) Murphy for the past 55 years.

Born in Killorglin, County Kerry, Ireland, a son of the late Daniel and Eileen (Cahillane) Murphy, he came to the United States in 1950, where he lived in Providence for 35 years, before moving to East Greenwich.

Dan was a code enforcement supervisor for the City of Providence Redevelopment Agency for 30 years, retiring in 1986. He was also the owner of Shannon Industrial Cleaning Company.

As an avid golfer, in Rhode Island and Florida, Dan was fortunate enough to have achieved two holes-in-one during his play in Naples where he wintered. He was proud of his Irish heritage.

He was a communicant of Our Lady of Mercy Church, a member of the Ancient Order of Hibernians, the Shamrock Society of North Providence and South County, and the Sons of Irish Kings.

The funeral will be held Tuesday, at 9:30 am, from the Urquhart-Murphy Funeral Home, 800 Greenwich Ave., Route 5, Warwick (Exit 12A on I-95) with a concelebrated Mass of Christian Burial at 11 a.m. in Our Lady of Mercy Church, Fourth Avenue, East Greenwich. Burial, with military honors, will be in the Rhode Island Veterans Cemetery, Exeter. Visiting hours Monday, 4 to 8 p.m.

In lieu of flowers, donations to Blessed Sacrament Church, 239 Regent Avenue, Providence, R.I. 02908 in his memory will be appreciated.