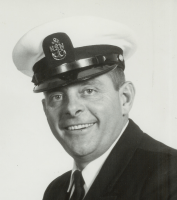 Charles S. Mathis, Jr., 87, USN Retired, of East Greenwich, passed away on Nov. 11, at the Philip Hulitar Inpatient Center in Providence. Charlie was the devoted husband of the late Marion W. Mathis. Born in Converse, South Carolina, the son of the late Charles and Pearl Mathis Sr., he lived in East Greenwich for most of his life.
He served 21 years in the Navy. He loved to garden, feeding his family well. He also loved to golf. He was involved locally with the Boy Scouts and Little League. He is survived by his children, son Chuck Mathis and his wife Christine of Cranston, and his son Bob Mathis and his wife Janice of Canton, Conn. Charlie was the adored grandfather to Olivia, Connor, Stewart and Jessica Mathis. He is also survived by his brother Dewey Mathis of Bartow, Fla. He was the brother of the late James, Elbert, Clarence and Bonnie Mae Mathis. He also leaves behind his many friends from Dunkin Donuts in East Greenwich, with whom he shared many a story over coffee.
Funeral service Monday at 11 a.m. at the Hill Funeral Home, 822 Main St., East Greenwich. Burial with military honors will be in the Rhode Island Veterans Cemetery, Exeter. Calling hours are Sunday from 3 to 6 p.m. In lieu of flowers, contributions in his memory may be made to Home and Hospice Care of R.I., 1085 N. Main St., Providence, RI 02904.