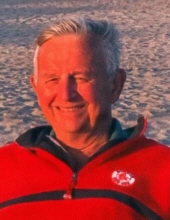 Alan Stuart Cameron, 78, of Narragansett, passed on at his home surrounded by his loving family on October 14, after a courageous battle with cancer. He was the loving husband and best friend of Elizabeth Brothers Cameron for 57 years.

He was the son of the late Alice Sjoberg and John E. Cameron, and the brother of the late John F. Cameron. He graduated from South Kingstown High School, Providence College, and Lee Institute for Real Estate. After a 15-year career with Columbus National Bank as vice president, Alan established A.S. Cameron Realty, Ltd., in East Greenwich in 1978, then merged with J.S.W. Lillibridge in 1980, forming Cameron & Lillibridge Realtors at 110 King Street in East Greenwich (the old jail).

Calling hours will be held at Avery-Storti Funeral Home in Wakefield from 4 to 7 p.m. Tuesday, Oct. 19. Mass of Christian Burial at St. Mary’s Star of the Sea Church, Narragansett at 10 a.m. on Wednesday, Oct. 20. Burial will be private.

In lieu of flowers, donations may be made in Alan’s name to The Tomorrow Fund, 593 Eddy St., Providence, or St. Jude’s Children’s Research Hospital.

You can leave an online condolence at Avery-Storti Funeral Home website HERE.