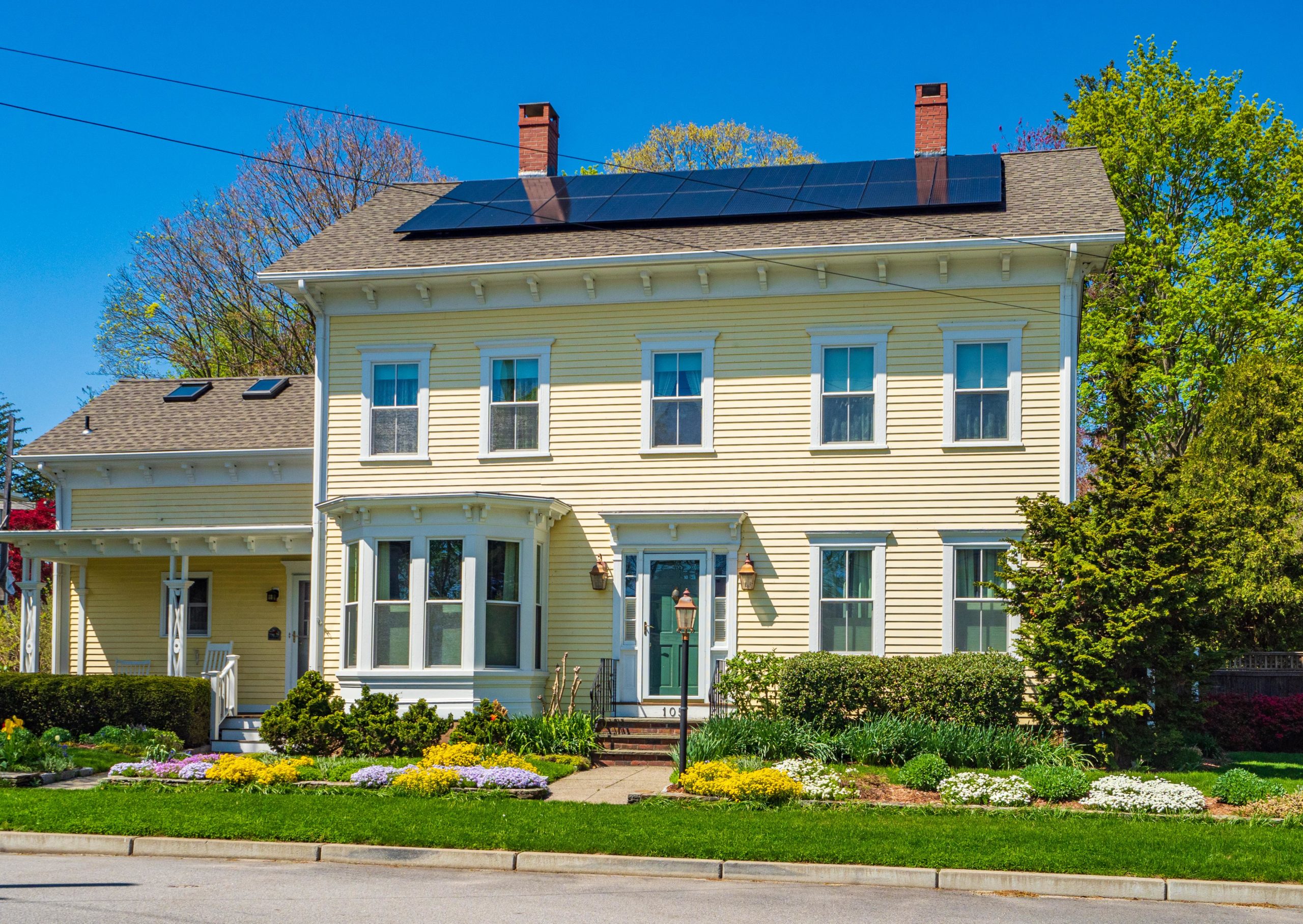 In the fall, my wife and I decided to put solar panels on our East Greenwich home (pictured above). We investigated the options and costs of solar on the Energy Sage website sponsored by National Grid. Energy Sage explains how solar works and gives examples of the costs, using your own electricity usage figures. The site links to solar installers who can look at your house on Google Earth and offer quotes for putting in a solar system. Not every house is ideal for solar. A large south-facing unshaded roof is perfect. The roof needs to be in good shape; you don’t want to have to remove the solar panels to replace the underlying roof in a few years.

We found that most solar homes in Rhode Island take part in what is called “net metering.”  This involves connecting your solar system directly to the power grid.  When you are making a lot of solar power, it flows into the grid.  When you are not, like at night, power flows from the grid to your home.  National Grid looks at your last three years of electricity bills and tells you how large your system can be; the goal is to make just enough power in a year to balance out what you have used in the average year. Net metering is a good deal. Essentially, National Grid is paying you the retail rate for power that you generate. If your system is correctly sized, your electricity bill will be close to zero.

The State of Rhode Island offers a choice of two incentive programs. One is a grant from the R.I. Commerce Corporation Renewable Energy Fund, for $0.85 per watt of installed power, up to a maximum of $7,000.  A typical system is 3,000-7,000 watts, so the grant may be $2,500-$6,000.  The next grants will be awarded in July. The other program is called the R.I. Renewable Energy Growth Program. This does not involve any lump sum of money.  Instead, it promises to buy all the power your system generates for 15 years at a rate of $0.2965/KWH.  I looked at our last electric bill and figured out we were paying about $0.22/KWH now, so this is more than the going rate.  A typical home using about 400 KWH monthly would make about $25-30 a month in profit using this program, at least initially.

Both programs have details that matter. The grants are limited, and they are given out two to three times a year. To get a grant, you need to contract with a solar installation company, which will apply for you and wait until the grants are awarded. This slows down the process of getting solar by a few months. A concern about the Energy Growth Program is that electricity rates have been slowly rising over the years; it is likely that within 15 years the rate will be higher than the $0.2965/KWH that you lock in. While you stand to make a profit early on, in the late years of the contract you may be losing out compared to someone who elects plain old Net Metering. Solar systems last about 25 years.

Paying for the system is usually done in one of two ways. You can pay for it up front and offset a good bit of the cost by using the state grant and the federal tax credit. We found that the solar system would pay us back in seven to eight years, given our average electricity costs and the net cost of the system. (After that we could expect another 17 years of free power.)  Or you could take out a loan and use your savings on the utility bill to pay back the loan. This way, the payback is a good bit longer, but there is little upfront cost.

We decided to go with a local solar company rather than one of the out of state companies recommended by Energy Sage. We live in the historic district of East Greenwich, so we had to submit details about the plans to the Historic District Commission. The members of the HDC are generally pro-solar; the contact person at the Planning Department is Lea Anthony Hitchen ([email protected]). The solar installer was able to create a photo for us to include with the plans, showing what the panels would look like on our roof. We signed a contract in December, met with the HDC in January, got the grant in March and got our installation done in April. It took one day, with a team of 3 that included a licensed electrician.  Now we have another reason to enjoy sunny days, as our power meter spins backwards!

On a political note, we are frustrated that the current regulations only allow a homeowner to install enough solar to equal past electrical usage. If one plans to later install heat pump systems, electric appliances, or a charger for an electric car, there is no provision for putting in a larger solar system up front. We will have to go through the whole process again to upgrade our system once we begin using more electric power and less fossil fuel. Why is Rhode Island limiting home solar power, while we debate about cutting forests for commercial solar installations? This needs to be changed.

In the spirit of Earth Day, we have been frustrated by the state regulations on residential solar installations like ours. We have two suggestions that together might increase clean solar power on Rhode Island homes and businesses significantly.

First, the Rhode Island law on solar installations limits their size to match the power use of the home. National Grid will not allow someone to install a larger system than they need to match their electricity use, as averaged over the past three years. The way net metering works, any surplus power generated results in a credit on the homeowner’s electricity bill. These credits are not redeemed for cash at any point, so there is no incentive to install more solar than you need.  The good news is that extra power generated, say, in July, results in credits that can offset power needs in January, when days are short. The bad news is that someone who wants to install a larger system, intending to later buy an electric car or electric appliances, cannot install a larger solar system in the first place; they must demonstrate greater electricity use and then go back to get approval for more panels. Someone who wants to put in as much solar as their roof will allow for the good of the planet cannot do so as the RI law is written. Why are we cutting forests for new commercial solar installations while we refuse to allow homes and businesses to make full use of their sunny roofs?

Massachusetts allows home systems to be installed up to 10 MW. New Jersey and Ohio have net metering with no size limit. Nearly half of the states have net metering allowing at least 1 MW in system size. This web site details how other states are handling these issues: https://www.ncsl.org/research/energy/net-metering-policy-overview-and-state-legislative-updates.aspx

The other tweak in the law that would encourage more solar power in RI would be to offer more incentive for people to put up larger systems. If the law were changed about limiting system size, then how should National Grid compensate solar owners for the extra power they generate? The utility is a publicly owned company, regulated by the Public Utilities Commission. The company buys power from ISO-New England and manages the grid that delivers it to homes and businesses. The nuts and bolts of the grid belong to National Grid: the power lines, substations, wires, and transformers that physically deliver power to customers in Rhode Island. National Grid’s bills reflect this, in that they have a charge for electricity delivery (the grid) and for electricity supply (the power itself, mostly generated by ISO-New England).

It would not be reasonable to ask National Grid to pay small-scale solar producers the full retail rate, because that includes both the charges for the grid and for the power itself. It is fair to ask that National Grid pay for any surplus solar power generated at the same rate it pays for power, roughly half the full retail rate, what is labeled as Electricity Supply on our bills. There are advantages to the utility in doing so. Solar is generated close to where it is used; transmission losses are minimal. Solar is clean power, generating no greenhouse gasses, unlike power from ISO-New England, which is primarily generated by burning natural gas.  And solar generation peaks on those hot summer days when power needs are greatest to run air conditioners.  If the grid had more solar power on those peak days, there would no longer be a need to bring online the most expensive and dirtiest generators, those running on oil and coal.

In short, we are proposing that the R.I. law dealing with residential and small-scale business solar systems be changed in two ways:

Climate change is bearing down on us with the force of a tsunami, and a minor change in the RI laws to encourage more small-scale solar power generation could encourage homeowners to be part of the solution.  We need to make progress towards zero carbon emissions, and a solar powered household can come close to that goal while generating clean power for neighbors, as well.

Fred Griffith is a retired neurologist living in East Greenwich.