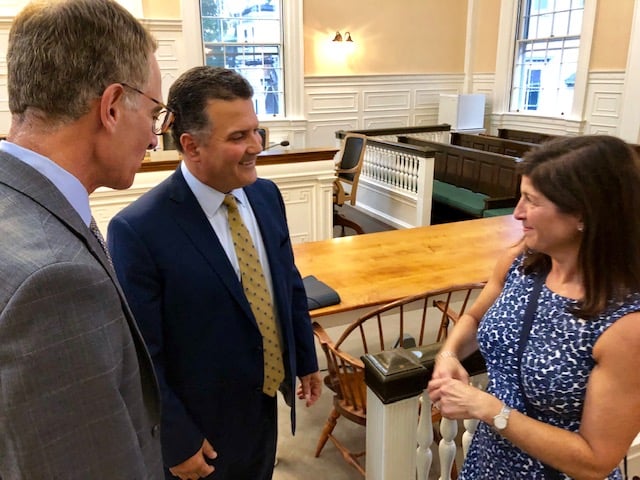 Andrew Nota is steeped in the ways of Rhode Island local government, with 28 years spent working for the towns of Narragansett, South Kingstown, and Jamestown. He brings that experience and a wealth of civic connections to his new job as town manager for East Greenwich as of Aug. 31. The council voted Tuesday in open session to approve his hire, 5-0, with a three-year contract worth $150,000 the first year, and with 2 percent raises in years two and three.

“I’m going to be happy to vote ‘Yes’ on this motion and I look forward to Mr. Nota moving his office by boat if necessary across the Bay and into Town Hall in East Greenwich,” said Council President Mark Schwager just before the vote.

In his comments, Vice President Mike Donegan noted he’d heard from several state officials praising Nota. He and other councilors commented on the wealth of applicants who’d applied but that Nota was clearly the best. 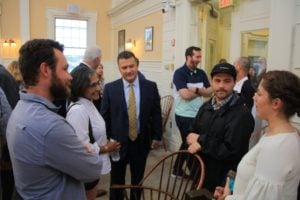 Nota’s family was there to share the moment: his wife, Michele (head of alumni relations for URI), and their three adult children. Also there were three men from the Narragansett Parks & Recreation Department. “We’re here for Andy,” they said. Nota grew up in Narragansett and spent the first 16 years of his municipal career in Narragansett. He’s been gone from that job for 15 years, but obviously still has strong supporters there.

Nota, 53, was born in Providence but has spent nearly all of his life in the southern part of the state. He earned his bachelor’s and master’s degrees at URI (finance and management and an MBA).

His first municipal job was with the Narragansett Parks & Recreation Department. While there, he studied law at New England School of Law, earning his JD in 1998. By the time he was done – it took four years attending classes at night – he’d decided he wanted to continue working in municipal government rather than practice law. Still, the law degree hasn’t gone to waste.

“It has been invaluable to me in my various roles ever since,” he said. (Here’s the resume he submitted with his application: Nota Resume.) 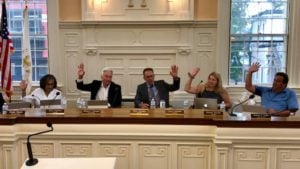 From Narragansett, Nota spent 10 years working in South Kingstown, first in parks and recreation, then as director of administrative services. He took the job of town manager for Jamestown in 2014. Today, he and Michele live in Jamestown.

Nota said the family likes to be on the water in the summer (they own a J24 and a Boston whaler) and ski in the winter. He also likes working outside in the yard or on the boats or cars. Their house was built in 1877 and he has been restoring it – “I do a little bit of everything: word working, painting, electrical and plumbing, and more.”

His office at EG’s Town Hall won’t be as close to home as his current one, which sits just a half mile away from his house.

“This is going to be the longest commute in my entire career,” he said with a laugh about his new position. Nota said he hadn’t been looking for a new job – “Jamestown’s a wonderful place” – but East Greenwich was among the towns he’d always been interested in. After EG’s well publicized turmoil under the previous council and what Nota saw as a recent return to stability, he thought the timing was right. He applied for the job.

While much of what Nota will do as town manager in East Greenwich will be similar to what he’s been doing in Jamestown (same town department structure, same reporting requirements), there are some big differences. Both are small towns, but East Greenwich at 13,100 residents is more than twice as populous as Jamestown, which has 5,500 year-round residents (9,000 seasonal). EG’s budget is bigger too: $63 million versus $25 million. Perhaps most significantly, while Jamestown is more of a retiree-and-vacation hub, East Greenwich appeals to families because of the well-regarded school system. Nota said he respects that.

“The schools are driving the housing demand,” he said. “A consistent and stable investment in schools is going to be a necessity.”

He said in Jamestown he’s gotten on well with school officials. “I’ve found that having that close working relationship is essential,” he said. Ultimately, you’ve got to strike a balance between the schools, municipal interests, and affordability, he said.

When it comes to management style, Nota said he strives to be flexible.

“There is no one style that will allow me to be successful in East Greenwich,” he said. In general, Nota said, he believes in a “participatory and democratic” management style, a “servant leader” approach where he leads by supporting senior staff. But he added he was also comfortable making tough decisions when necessary.

With regard to working with the municipal unions, “my philosophy is we need the ability to sit at the same table and communicate with each other,” Nota said. Making sure everyone is aware of the fiscal impact of collective bargaining agreements is vital.

“Ultimately, it’s about what’s in everyone’s interest,” he said.

Nota is not a fan of the new “evergreen” legislation that was signed into law in May. The R.I. League of Cities and Towns, for which he is a vice president, came out strongly against it. When all 39 cities and towns opposed the legislation, Nota said, “the General Assembly needs to listen.”

Nota’s League work is just one of the many organizations with which he’s affiliated. He’s vice chair of the Interlocal Risk Management Trust (insurance for public entities), and president of the R.I. City and Town Managers’ Association, to name three current involvements.

At the meeting Tuesday, councilors talked about what it had taken to get to this night. The five Democrats had run on a platform last fall of getting rid of former Town Manager Gayle Corrigan so it was no surprise when they voted 5-0 to do just that at a special session Nov. 30. But that left them with a long to-do list. With the help of interim Town Manager Joe Duarte (the town’s DPW director), they tackled hiring a new town solicitor, new fire chief and new finance director. They also had to deal with five municipal union contracts up for renewal, dozens of legal actions facing the town, and a 2020 budget to build and approve. Tuesday’s meeting marked their 40th since being sworn in – about twice the typical number.

“The East Greenwich council had to step into a very active role,” Nota said. “They have been intimately involved in many decisions.”

With Nota’s hire, the idea is that will end.

“When you see the routine settle, that is the normal schedule of a town that’s running smoothly and routinely,” he said. “When that happens, that will be the telling sign for everyone in town.”