Joint Website Gets Thumbs Up on Townside; For Schools, Not So Much 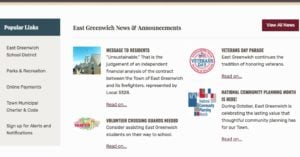 Part of the new Town of East Greenwich website homepage.

Long before the words “One Town” were first uttered last June, the Town Council had voted to update its website and, working with school officials, they decided to have one website for both the town and the school district. At that time, the town had a website and the school department had a website. The idea was one site would be both helpful for residents and save money. The reality has been more challenging, at least according to school officials.

“The way that the website is set up, we are a department in the town,” said Supt. Victor Mercurio. He and other school officials see that was confusing for school department users. And, they say, the site has not been as easy to use as the old site.

How did we get here?

“This entire project was at the behest of the council,” said Wendy Schmidle, the town’s director of technology. “Councilor Todd was interested in having a mobile app for the town. We investigated a number of different solutions to satisfy that requirement. As we got into that whole conversation, we realized that in order for a mobile app to work properly, it needed to link back to a website that was more mobile dynamic.”

Mobile dynamic or mobile friendly websites are designed to be read easily on a small screen, so instead of opening to a website and having the whole home page show up as it would on a desktop-style computer, it would be immediately readable (no using your fingers to enlarge the screen to see or read something).

“That started the investigation into, ‘Can we find a company that can satisfy not only the mobile app piece but can it satisfy our other requirements as well?’” said Schmidle.

It turned out South Kingstown had just gone out to bid for a new website design and had received eight responses.

“We piggybacked off that process,” said Schmidle. East Greenwich interviewed three of the bidders and went with CivicPlus. South Kingstown did as well. Schmidle said Barrington and Westerly also use CivicPlus, which she said has designed websites for more than 2,400 communities across the country.

“It sounds like a lot of money, but for what we are getting, if we had bought two separate sites and a mobile app, it would have been a lot more expensive,” said Schmidle.

“The whole goal was to co-brand the site, get the cost down, have one vendor, have one tool if you will, one way for the resident or student or business to access information … and have it look like it was from the same town,” she said. “CivicPlus could do all of that for us and also provide the mobile app.”

(The mobile app has not yet been designed. Schmidle said it won’t be until CivicPlus determines the website is “done,” at which point CivicPlus’s app development team will pick up the project.)

For the schools, the website rollout has been difficult. One challenge was the transition itself. Originally, the website was to go live in mid-October. The School Department said no, since the switchover would be taking place during the first weeks of school. The town offered to push it back to mid-December, but the School Department wanted it done over the summer so that it would be live by August, when use would be ramping up in preparation for the start of school. However, that meant the site launched a little prematurely.

“I have no issue with the municipality and the schools having links where I can get to their stuff and they can get to my stuff,” said Mercurio. “When they start to get inter-tangled, that’s when it starts to get confusing for folks.”

“The way it works now is you think you’re on the school website, but as soon as you go to a different menu, it brings you back to the town. There should be a step. Ok, here’s the town, but in the school site, you should stay within the schools,” said Fain. “You shouldn’t click on the calendar and have it bring up the town calendar for you to do your searching to try to find the school stuff. When you’re at the school site, I want the school calendar. I don’t want to have to go through all this other stuff.”

He continued, “Think about a large corporation that has subsidiaries. Can you imagine going to one of the subsidiaries and clicking on the calendar and being kicked back up to the main corporate site?”

School officials spoke with Civic Plus a couple of weeks ago and learned they could have a site-within-a-site but it would cost an additional $8,000.

“In other words, the whole implementation of this would be pointless,” said Fain. “We would be better off going with what we had.”

Schmidle said switching to a new website is always hard but, beyond some of the headaches of implementation, a single website for the town and schools will require a different mindset.

“This will be a cultural work in progress because we’re not separate,” she said. “Before we were separate.”

(Read about registering for on the new website here.)