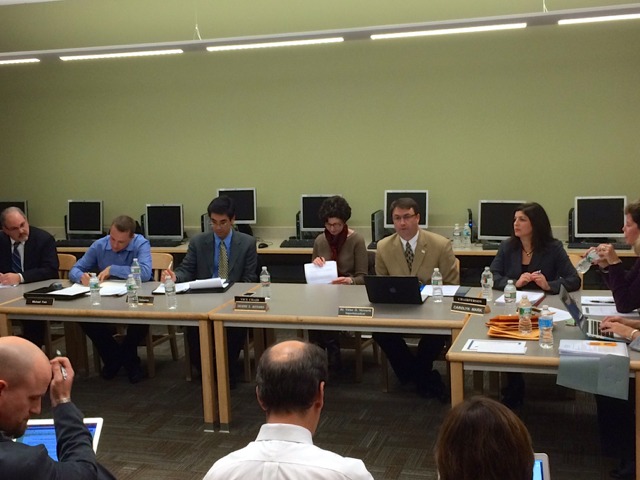 The first test of the new panel came when they were asked later in the agenda to approve the high school’s program of studies for 2015-16. It took three votes, including two split votes – a rarity the past two years – but approval was eventually gained, 6-0.

Committeewoman Yan Sun was absent due to a long-planned academic conference in which she was involved, according to Mark.

Podraza outlined other changes as well, including a change in how long a student must be enrolled in East Greenwich to be considered for valedictorian or salutatorian (from the beginning of junior year now to the beginning of sophomore year for the Class of 2018), and elimination of Principles of Science and Reading Lab (because they have never run) and Forensics 2 (which is being replaced by Nanotechnology).

The 3-3 votes weren’t on the program of studies so much as on the timing of the vote.

“I propose that we table this,” said new Committee member Michael Fain, noting that the committee didn’t approve the program of studies last year until January. Committee members this year received the new program of studies Nov. 26, the day before Thanksgiving. Fain said while he’d read through it, “I’d like a couple weeks to look into it further.”

Fain proposed tabling the program of studies until the next meeting, simply to give members more time to review it. That motion, too, went 3-3, along the same lines, so it also failed.

“My vote was in deference to my new colleagues,” Mark explained, noting she was in support of the program of studies but wanted all the members, including Fain and the absent Sun – who had submitted some concerns to Principal Podraza – to be able to have their full say.

The committee voted a third time, with the understanding they could approve the program of studies but still revisit it. This time, the vote passed 6-0.

“Thank you, everybody,” said Mark. “It was a very thoughtful discussion.”

Editor’s note: The issue that came up during the program of studies discussion of students taking outside online courses and how those courses might count towards GPA will be the subject of a future article.