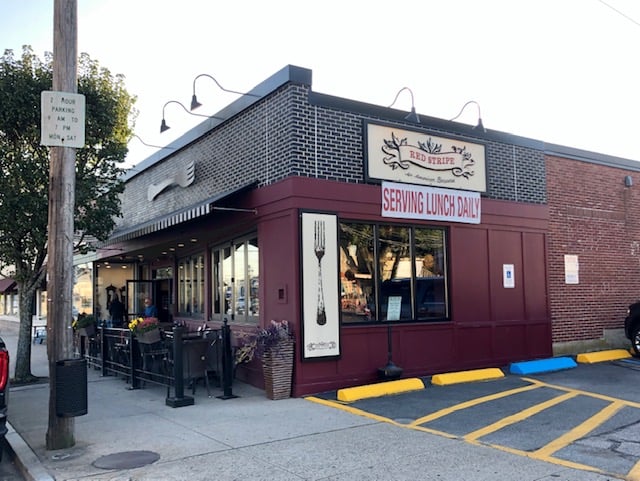 Above: 455 Main Street when it was Red Stripe.

It may feel pretty grim at the moment, with filled hospitals and stay-at-home advisories, but things are looking up for 2021. Of course there are the vaccines, which should be widely available by late spring. On a local level, that’s well timed for the anticipated opening of Union & Main, a new restaurant planned for 455 Main Street, home of the former Red Stripe.

It’s the project of the Grampo restaurant group, the same people behind Back 40 Food & Drink in North Kingstown and Black Oak Kitchen and Drinks in Coventry. Yes, Olivia Culpo – Miss Universe 2012 – is one of the partners.

The group first considered the space back in March, soon after Red Stripe closed , eager to open in East Greenwich. But COVID-19 restrictions had just been instituted and things were just too uncertain.

“When everything got shut down in March, we didn’t know what was going to happen. It was the great unknown,” recalled partner Justin Dalton-Ameen. With their other two restaurants closed, Dalton-Ameen said they decided they just couldn’t take on a new venture then. “We put the brakes on it,” he said.

After a positive summer at both Back 40 and Black Oak, they learned the Red Stripe site was still available and they went for it.

“Our plan is to blow it all out and do a complete reimagining of the space,” said Dalton-Ameen. Think white subway tiles, more open space, a bar in the front and one in the back room.

Back 40 Food & Drink in North Kingstown.

They are also hoping to convert part of the side parking lot into a patio dining area. “It will make that corner pop a little,” said Dalton-Ameen.

The menu would be similar to the other restaurants: “American comfort food; New England comfort food.”

The idea, he said, is for a “nice, comfortable neighborhood place.”

The Town Council will hear their application for a liquor license at its next meeting, Dec. 14.