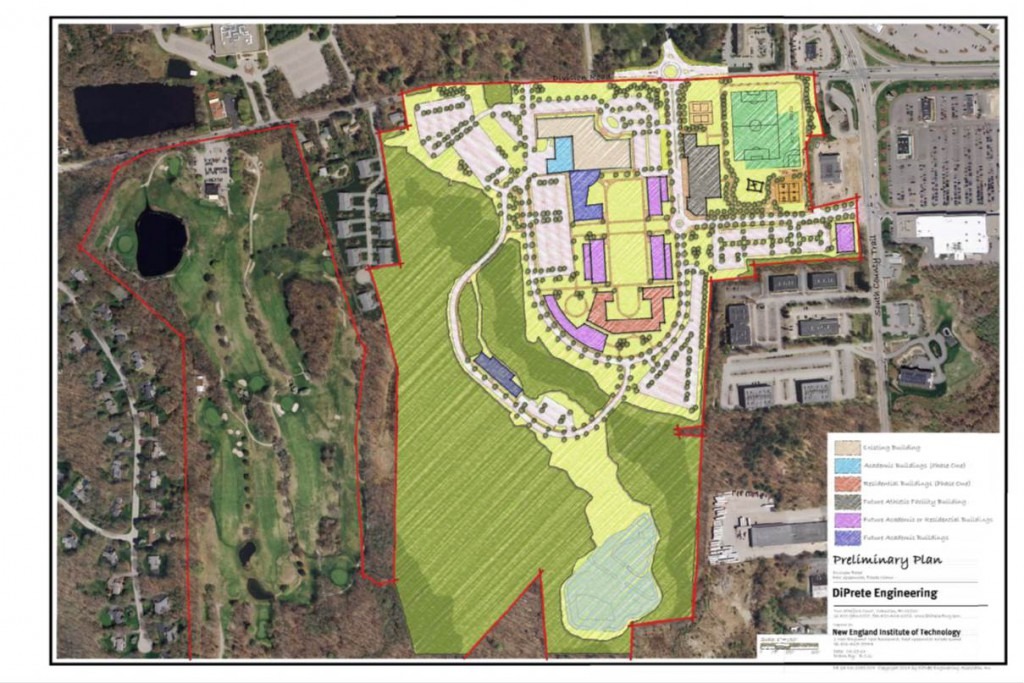 New England Tech is starting a long-planned $120 million expansion that will bring dorms to the Town of East Greenwich, following the Planning Board’s unanimous approval last month of the school’s preliminary plan.

Work will begin immediately on expanding the dining hall in the main building. Construction of a 400-person dormitory will begin after the building is designed, possibly by summer 2015, officials said, with plans to open to students by fall 2017.

The expansion marks the next step in a plan that would ultimately transform a 2-year commuter technical school to a 4-year residential institution, including several additional buildings in the final buildout.

For now, the only new building will be the dormitory, which will sit south of the main campus building. Recreational facilities will soon follow, officials said, but no specifics were offered.

Stumbling blocks from an earlier meeting with the Planning Board included sewer use and traffic between the campus and the medical buildings to the south. But they had been settled by the time the board met with NEIT officials again, Sept. 17. With NEIT’s proposed expanded sewer use, Director of Public Works Joe Duarte said, it looked like the town’s sewer line could handle additional flows from New England Tech.

“We’re comfortable with what they’re proposing,” said Duarte, who said he needed to safeguard some of the sewer line capacity for potential future development on the South County Trail corridor. Capacity at the sewage treatment plant was never an issue since the town is using only about 60 percent of the plant’s total capacity. Rather, it was about making sure the pipes that carry the sewage to the plant could handle the flows.

Another issue that needed ironing out was the traffic flow between the campus and the medical office buildings. NEIT students will continue to be blocked from driving into the office complex via the existing access road but, in an agreement with the owner of the development, visitors to the medical offices will be able to use the access road to get to New England Tech Boulevard, which has a traffic light at the intersection with South County Trail.

“This is an exciting day for New England Tech,” said NEIT President Richard Gouse in a press release Wednesday. “This is the 2nd phase of our $250,000,000 campus development program in East Greenwich. This expansion will allow us to offer on-campus housing for the first time in our college’s 75-year history. We will also beexpanding our information technology’s facilities to more than 300,000 square feet. This will make us the region’s largest provider of collegiate-level technology-driven training. These changes will also allow our college to offer new and expanded degree granting programs in such related areas as information technology, advanced manufacturing, health sciences, architecture, engineering, video/audio production.”