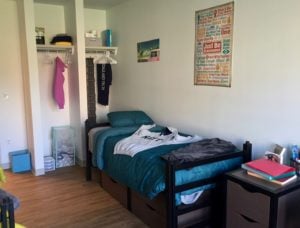 The dorm rooms at New England Tech are mostly doubles, with shared bathrooms.

New England Tech’s first residential students moved in almost two weeks ago, another step in the university’s transition from its commuter school roots. The shift started when NEIT moved to East Greenwich in 2011. While a couple programs remain in Warwick, East Greenwich is been the main campus for NEIT’s nearly 3,000 students ever since.

To attract and accommodate residential students, NEIT also built a new student center attached to the main campus building, with a larger dining area and lots of spaces for students to gather and hang out. The school spent about $65 million on the dorm, upgrades to the main building as well as a couple outdoor basketball courts and soccer fields. 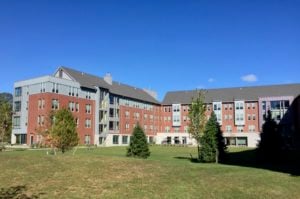 The new residence hall from the back. It’s shaped like a horseshoe.

The new dorm can hold 400 students. Fawthrop said residential students are being phased in. The residence director lives at the dorm with her husband and young child, as does another staff member. In addition, there are resident assistants, students who get free room and board in exchange for providing the first line of response for dorm residents in need. 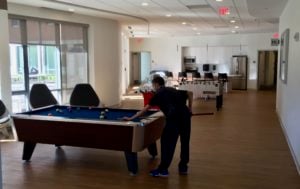 Fawthrop said the first two weekends have been uneventful but acknowledged that issues may arise.

“Not unlike every other college that has residence halls, there is the potential I guess,” she said. “We’ve been open two weekends and we’ve had no issues. We have pretty stringent expectations for them. And we keep them busy. Our students are in class a lot because we have 10-week quarters. To finish in 18 months for an associates degree or three years for a bachelor’s, our students are pretty focused academically.”

The building is outfitted with fire alarms that will be able to tell the EG Fire Department exactly where there’s a fire. Fire Chief Russell McGillivray said firefighters are spending time at the university right now getting familiar with 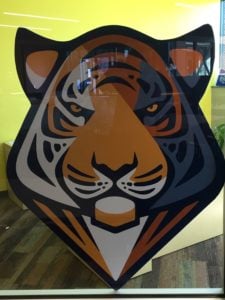 NEIT now has a mascot – the Tech Tiger.

the new dorm and student center. He said firefighters from Warwick and West Warwick will be visiting later this month, since they will probably have to respond there on occasion too.

“We need to make sure it’s not too big of a drain on town services,” McGillivray said. For small things, prank fire alarms for instance, “I’m hoping a little self-policing will stop that stuff before we have to respond.”

“At this point, we don’t anticipate any major disruption of town services,” said Police Chief Steven Brown. “We already go there quite often … for motor vehicle accidents, just minor stuff.”

Both McGillivray and Brown praised the school for hiring veteran public safety officials.

Brown said his biggest question is the potential for more pedestrian traffic on the already busy Division Street and South County Trail. What is a large group of students decide they want to go to a movie, he said. Does that become a problem?

“That’s unknown at this point,” he said.