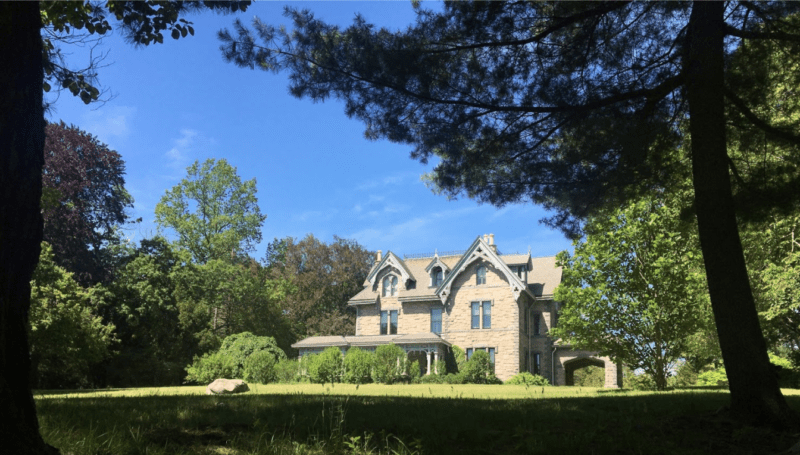 The Warwick Victorian house museum of Clouds Hill, also known as “Cedar Hill,” has a new director and is on the cusp of an ambitious conservation plan to bring the house and estate to life. To raise funds during the impending conservation work, the museum will be holding a plant and yard sale on June 5th, from 9 a.m. to 1 p.m.

Built as a wedding present from William S. Slater to his daughter Elizabeth Ives Slater Reed, the house and its estate were passed down to the eldest daughters of the Reed family. Designed by Providence architect William R. Walker, Clouds Hill (also known as “Cedar Hill”) was lavishly decorated in the Aesthetic English and Scottish style with geometric designs drawn from nature and orientalist themes. The Reed family’s business in East Asia are attested by the Javanese statues and Chinese porcelain that adorn the house.

Anne D. Holst, the current family owner who still lives in the house, worked to place the house on the National Register of Historic Places in 2014 and formed a nonprofit to officially care for the estate. Paul Miller, a curator for the Preservation Society of Newport County, met Holst when they both worked on the conservation of the Isaac Bell House in the mid-1990s.

When he came to visit Clouds Hill, he was stunned by the estate and its careful preservation of Victorian style. “I was amazed at the caliber of the furniture and that so much of it was intact. Fast forward to a year ago, there was a forum among preservation groups to discuss the future of Clouds Hill, and I felt strongly that it had a positive, bright future,” Miller said. Miller was appointed director of the museum in March (link) and the new plans for the museum are far-reaching.

At Clouds Hill, where so much of the house remains original, context is key. Miller describes the maintenance of a historical place’s continuity as “sacrosanct.” So, with grant funding, Clouds Hill has engaged the renowned conservation firm of John Canning & Co. to work on the house over the summer. Canning & Co. previously conserved the Rhode Island state capitol building, Grand Central Station in New York, and Boston’s Trinity Church.

One of the house’s most striking decorations is a room completely decorated in a late Egyptian Revival style, with intact WWII blackout curtains. Its fireplace is flanked by carved wooden sphinxes, and above on the wall, a row of hieroglyphic-inspired stenciled figures march around the room. In the museum, small patches of cleaned ceiling, “reveals,” show the vibrant, geometric patterns that once would have echoed the house’s colorful decorations. Once the soot left by coal heating is cleaned away, they will again.

With its detailed records, Clouds Hill also draws researchers from afar. Miller hopes to include the house’s collection of Colonial Revival furniture in Yale University’s Rhode Island Furniture Archive and the house’s rare, embossed Paul Balin wallpaper is almost extinct elsewhere in the US. The undisrupted quality of the house’s decorations makes it “one of the undiscovered jewels of Rhode Island,” Miller said.

Visits to the museum itself can be arranged by appointment HERE.