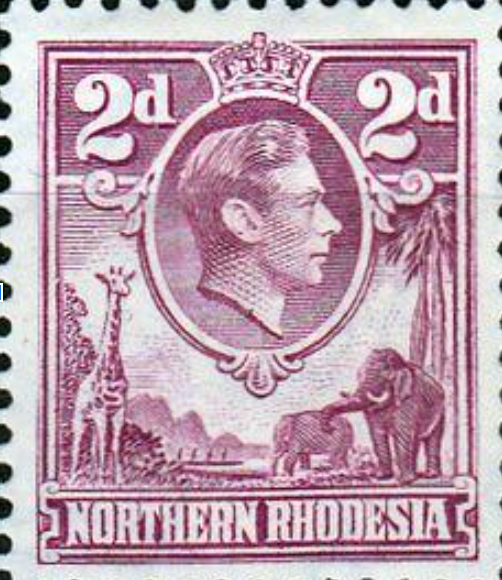 Every now and then something – a photo on Facebook, perhaps – brings to mind the old Kent County Jail, and that inevitably reminds me of my two visits to that building when it was still a functioning calaboose. Recently the reminder was an online reproduction of the stamp pictured above, a copy of which I once owned. When I was eight or nine. I’d mentioned to an older girl I knew (Esther Clarke, I believe) that I had a stamp collection, and she told me that a relative of hers—her grandmother or great aunt—was a stamp collector. There was nothing I wanted more than to talk to a grownup collector, and Esther said she’d ask this woman if she’d see me. A week or so later I was delighted to learn that I could see her that Saturday.

Esther’s relative was Martha Sunderland who, with her husband, Frederick – I think he went by Fred – had been running the jail since 1928. They’d taken it over when the previous jailer, Frank Burdick retired. Burdick, believe it or not, had been born in the jail, and was the eighth jailer in a family line starting with Earl Place, who’d run the jail in the early 1800s. Now it was the Sunderlands who occupied the jailer’s living quarters. Depending on whom you believe, it was built in 1795, 1796, or 1804. The existing brick extension containing the cell blocks was built, as near as I can determine, in 1884.

I showed up at the front door with two sheets of paper on which I’d pasted what few stamps I had. Most of them had been on envelopes I’d found while rummaging through the trash behind stores on Main Street. Mrs. Sunderland frowned when she saw them and led me over to a table where she kept her stamp albums. She opened the one containing her United States collection. There was page after page of United States stamps, each one positioned perfectly in a tiny ruled box. Many of the boxes were gathered into groups with titles above them – The 1934 National Parks Issue, The 1915 Panama-Pacific Exposition Issue, and so on.

“You probably don’t have stamp tongs, do you?”

She held up some tweezers that looked like the ones my mother used to pluck her eyebrows, except the ends were much wider.

“The only way you should touch stamps—especially new ones—is with tongs. When you start collecting new stamps you should think about getting some. Now look at this.”

She used the tongs to carefully lift up the bottom edge of one of her stamps. There was a small piece of translucent paper stuck to the back of the stamp; it was folded in half, and the bottom half was stuck to the page.

“That’s a stamp hinge, and it’s how stamps are supposed to be attached to a page. Gluing stamps to a page the way you did ruins them.”

Ruins them? I’d been expecting praise for my fine collection of stamps. Instead I learned that I’d ruined them. She saw my sad face.

“What did you glue them down with?”

“Then there’s no problem. When you get home fill up your bathroom sink with water and put in one of those sheets of stamps. Just leave it there, and when you return in fifteen minutes you’ll see the stamps floating free in the water. Take them out and let them dry on a dishtowel. And while they’re drying, change the water and put in the other sheet.”

I knew this would work because that’s how I got the stamps off the envelopes in the first place.

“Eventually all your stamps will be ready to put in a stamp album using the hinges I’m going to give you. But you don’t have an album, do you?”

“You’ll have to start saving your pennies.”

For the next half-hour she let me examine her albums – the United States album, the British Colonies album, and the world album. I looked at every page. It was like walking through miniature art museums. Many of her stamps weren’t even cancelled, so you could see every detail. I liked the U.S. stamps well enough, but my favorites were the British colonies. They had the best pictures and the prettiest colors. She had stamps from the colony of Northern Rhodesia (now Zambia), of course. One of my proudest possessions was a stamp from Northern Rhodesia, and I mentioned it.

She smiled. “You mean, Northern Rhodesia.”

And that’s when I learned it was pronounced roh-DEEZH-ya and not roh-duh-SEE-ya as I had been saying it.

When I left I had a jail business envelope she’d given me containing a hundred or so stamp hinges. I could hardly wait to get an album. As luck would have it, a couple of weeks later there was a Girl Scout rummage sale at the Varnum Armory. These were always the best rummage sales in town, and I never missed one, even if I only had a couple of nickels in my pocket – which was true that day. Anyway, what do I see on a 10¢ table but a stamp album. Doris Fish was reaching for it, so I lunged forward and snatched it up. She was quite angry, probably having intended to give it to one of her boys. (Or maybe just angry because of my rude behavior.) I took it to the checkout table, handed over my two nickels, and raced home. I can still picture the cover with the slogan, “The King of Hobbies and the Hobby of Kings.”

I spent the afternoon soaking off my stamps, drying them, and placing them in my new stamp album using the hinges so thoughtfully given to me by Mrs. Sunderland. To this day, as you can tell, I still remember her kindness and generosity.

Next week I’ll talk about my equally memorable, but not as pleasant, second visit to the Kent County Jail.

Donald Tunnicliff Rice is a freelance writer based in Columbus, Ohio. His latest book is Who Made George Washington’s Uniform? 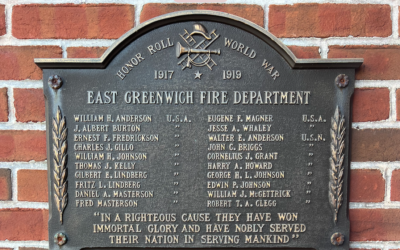 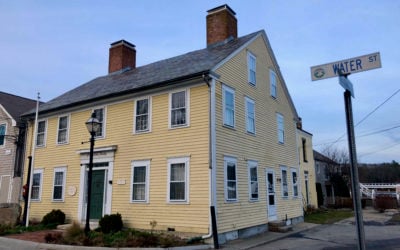 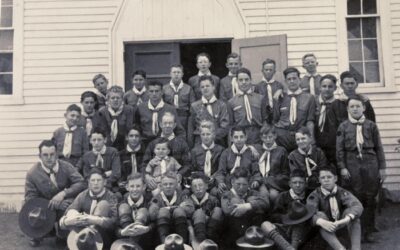 And a history of the troop, reprinted with permission of the EGHPS Troop 2 East Greenwich is...