Much More Than a Kidney 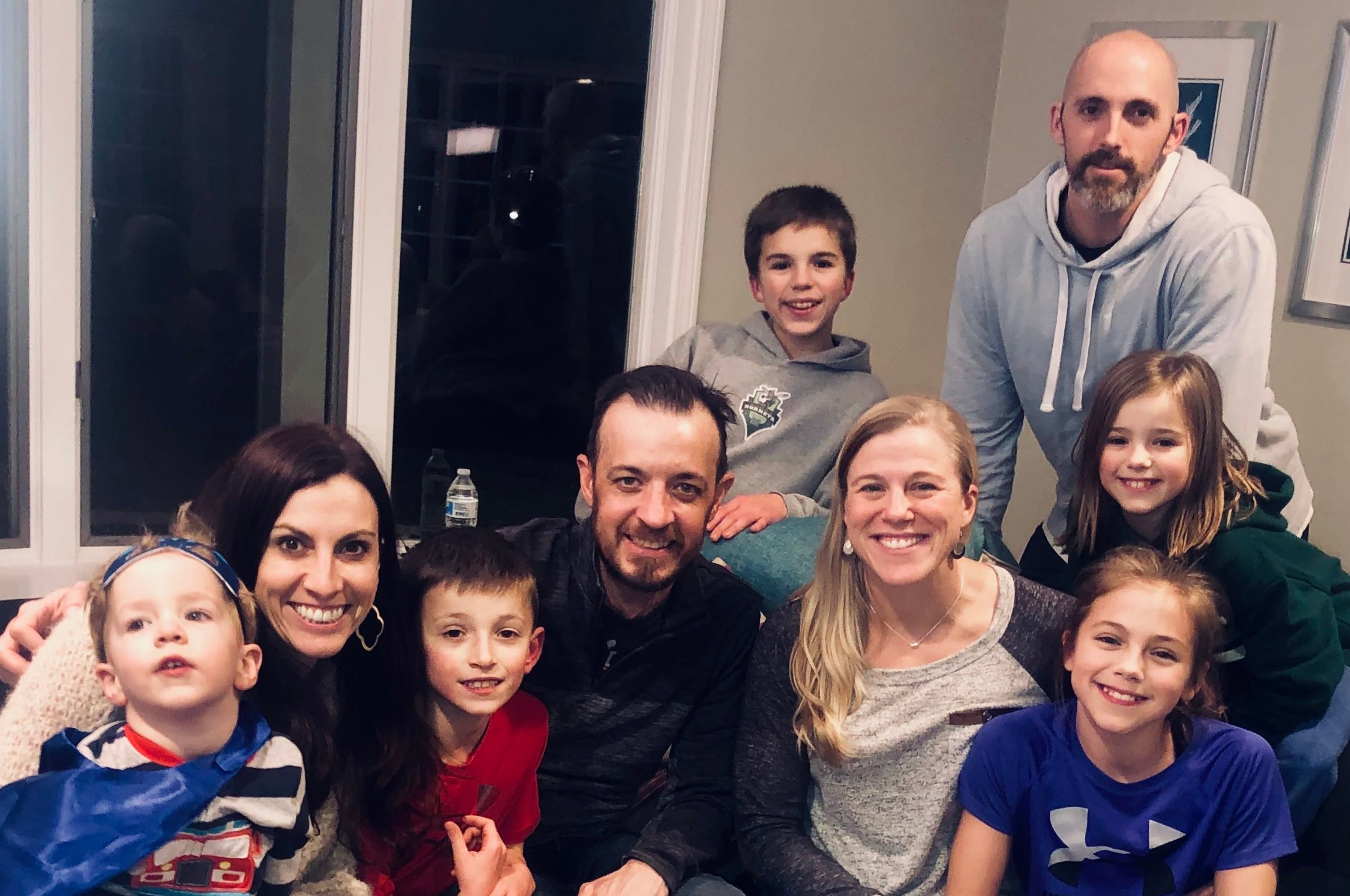 Above: The Shaw and Austin families, with kidney recipient Dave and donor Kathryn in the center.

When Dave and Melissa Shaw finally took to social media in their search for someone who might donate a kidney to Dave, they never imagined Dave’s donor would be a stranger. As longtime EG residents (Dave EGHS Class of 1992, Melissa 1995), the Shaws have a wide river of family and friends. They had assumed if anyone responded, it would be someone they knew

Many friends did respond. More than 50 people contacted the donor center at Rhode Island Hospital, a record. But it was an email from a friend of a friend in Massachusetts that changed everything for the Shaws. 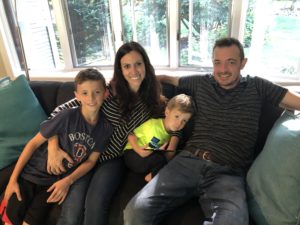 Melissa and Dave Shaw with their sons, Jonathan (9) and Hudson (4).

Dave Shaw’s kidneys probably started to fail while he was still in his 20s but he was only diagnosed in 2011 at age 35, after a nosebleed that wouldn’t stop at the annual Summer’s End concert. He ended up at the hospital that night and it turned out his blood pressure was through the roof. As traumatic as all that blood was, Dave learned later he was fortunate the high blood pressure didn’t cause a stroke or aneurysm. After a week in the hospital, Dave had his diagnosis: kidney disease. His kidneys were working only at 50 percent.

For several years, Dave’s kidney disease was managed with medication, but his kidney function continued to decline. In February 2018, the Shaws learned Dave would need a kidney transplant. He was on the donor list that relies on people agreeing to donate their organs in the event of death, but here in New England, it could take 10 years before Dave’s name reached the top of that list. In the U.S. alone, 100,000 people are currently in need of a kidney transplant.

The other option was to look for a living donor. Most everyone is born with two kidneys but a person only needs one, so we are all walking around with potential donor kidneys. Finding a match, however, is far from easy. In Dave’s case, he has three brothers but none of them share Dave’s blood type, putting them automatically out of the running. But blood type is only what gets a potential donor in the door. After that, there are lots of other tests someone must take to see if that person’s kidney is a good match. Understanding the difficulty of finding a living donor, Dave and Melissa eventually decided to take their request to Facebook.

A friend of Melissa’s shared the post and that’s when Kathryn Austin of Mansfield, Mass., saw it.

“For whatever reason I clicked on it and I saw Dave and Melissa and their kids,” she said. “He needed blood type O. That’s my type. I’m a pediatric nurse practitioner – I knew you could live with one kidney. Once I saw that face in front of me … it was hard for me to say no.”

Kathryn emailed Melissa then and there.

Melissa remembers forwarding the email to Dave, with the note, “We don’t even know her!” She said, “It didn’t even cross my mind that it would be someone that we didn’t even know.”

Kathryn started down the donor path. Others were on that path, including a cousin of Dave’s. That cousin got pretty far through the process before he was disqualified. Kathryn was up next. She’d already started the testing, getting closer and closer to a final OK. If at any time Austin had decided to step away, that would have been it. Living donors are not prodded to continue. Medical officials want to make sure a living donor really wants to do it. So as Kathryn completed the testing, there was also a series of “Yes, I want to do this” moments.

Kathryn, 41, a pediatric nurse practitioner, is married and has three children ages 13, 11, and 9, so the question of donating a kidney wasn’t hers alone. As it happens, this wasn’t the first time Kathryn had literally put her body on the line. Six years earlier, she had served as a surrogate for a couple unable to have children, giving birth to twins.

Her husband had been supportive then and he was supportive this time as well. Her children were old enough this time to be brought into the discussion. They were supportive too – once they learned a person could live with one kidney.

“These are things I could do,” she said simply of both decisions. With the kidney donation, she said, there was not a big enough reason not to do it. When it came down to it, she said, “Of course I will do this and save a life.” 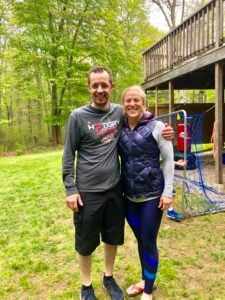 The two surgeries took place last November, at Rhode Island Hospital the Monday before Thanksgiving. By then, Dave was on kidney dialysis and was tired all the time. Alternatively, Kathryn, a CrossFit competitor, was in top shape going into the surgery. That day, doctors removed one of Kathryn’s kidneys then placed it in Dave, leaving his two failed kidneys in place.

This was Kathryn’s first real surgery. She did well but the pain was intense the first few days. As healthy has she’d been going into the surgery, she had imagined she’d be up and around for Thanksgiving. Instead, she said, “I couldn’t even get out of bed for 2 and a half days.”

That first week she had to remember: “I did this to myself!”

“It never occurred to me that it wouldn’t work,” she said. “If the kidney hadn’t worked, I probably would have been heartbroken.”

“It was like a light switch,” Melissa recalled. Dave’s body responded as well as they could have hoped to Kathryn’s kidney. He started feeling better within a day.

Their gratitude has been immense.

“Just the fact that someone who didn’t know us had something inside of them that said, ‘I want to help,’” Melissa said. “There are not enough words to describe how thankful we are to her and how amazed we are at her selflessness. She works full time. She has three kids. She’s married. They were all amazing and supportive.”

Dave and Melissa are also thankful for all the support they got from the community through the whole process. Now, they want to help others facing the need for an organ transplant. Melissa had done a lot of research while they were looking for a donor, but Dave said it wasn’t until after the surgery that he really started educating himself.

“Now when I look at all the numbers and how many people are in need, to be able to get a kidney is pretty amazing,” he said.

“In the dialysis unit, I was the youngest one there by decades,” he said. “I met one guy there who was in a wheelchair. He was waiting on a transplant but he needed to lose 100 pounds first … and he’s in a wheelchair.”

It made him realize just how fortunate he was.

“I think both of us now have a goal of really trying to help others and share our tools and resources,” Melissa said. “That’s really where we want to give back … because there’s so many people in that same situation.”

As part of that, the Shaws are participating in the 2019 Blue and Green Walk for organ and tissue donation awareness in Boston. And the Austins will be walking with them. In the months since the surgery, the two families have spent a lot of time together. The Austins have become like family for the Shaws, Melissa said.

Kathryn knows Dave and Melissa are grateful but she doesn’t consider her actions particularly special.

Not surprisingly, Dave and Melissa see it a little differently, as Dave said on his fundraising page for the Blue & Green Walk: “On Nov. 19, 2018, I was given a second chance at life when Kat Austin selflessly donated her kidney to me. She is our hero and angel and we are forever grateful.”

If you are interested in supporting the Shaws and the Austins in their Blue & Green Walk, you can find Dave’s fundraising page here. Learn more about organ and tissue donation and register to become a donor upon death here.

Like what you read here on East Greenwich News? Consider supporting it by making a donation! We cannot survive without your support. We are a tax exempt 501(c)(3) organization dedicated to keeping East Greenwich a well-informed community. Click on the Donate button below or send a check to EG News, 18 Prospect St., East Greenwich, RI 02818. Thanks!