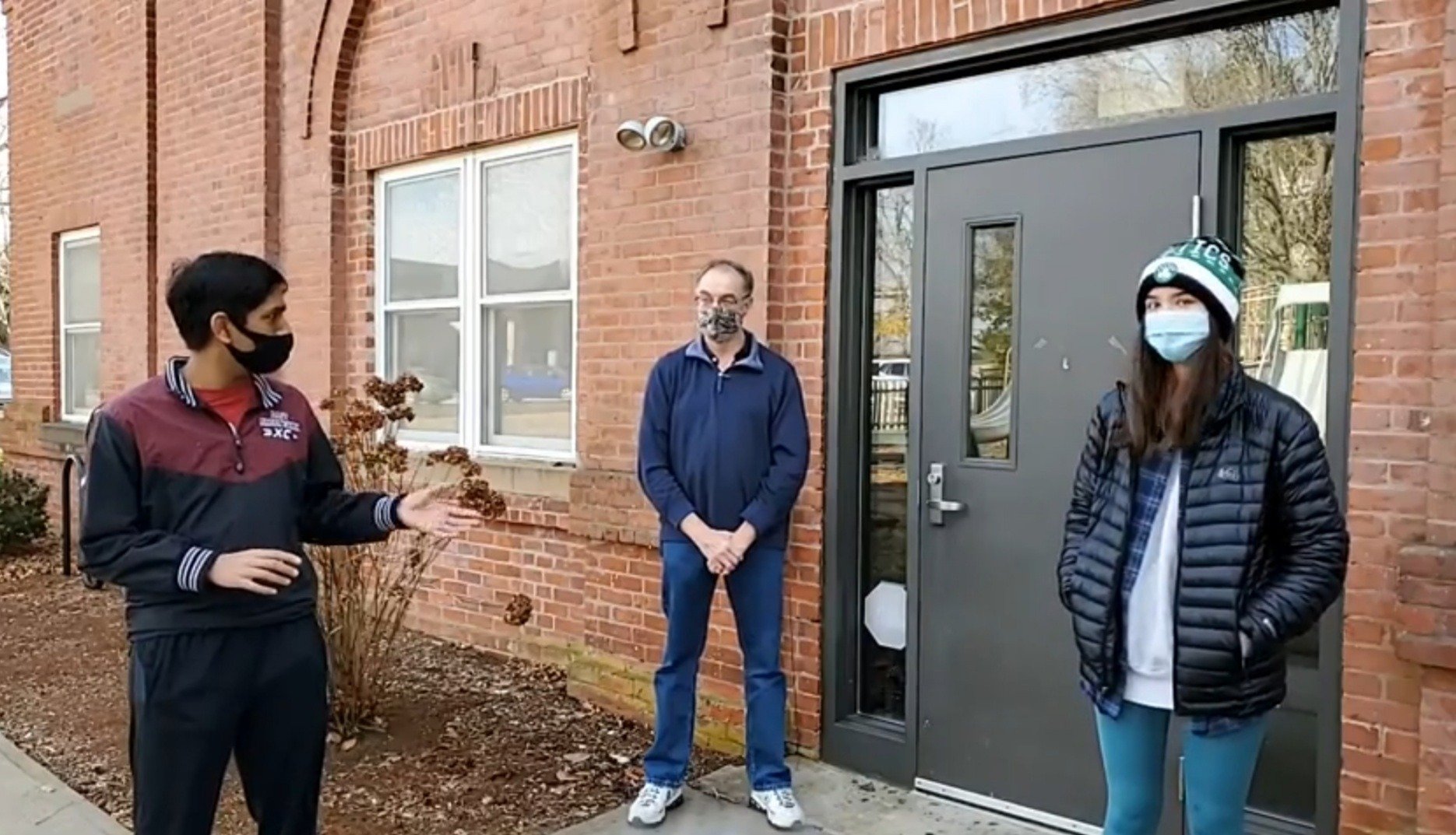 Above: Bob Houghtaling, center, with the stars of the only-since-COVID livestream “Sunny & Shunney Show,” Sunny Sait and Michaela Shunney.

In East Greenwich, the affable Bob Houghtaling is recognized by almost everyone. Also known as Mr. Bob, he’s maintained his role as the town’s substance abuse coordinator for 38 years, but he’s also taken on the role as a mental health counselor, philosophy enthusiast, youth cheerleader, true believer. Over the years, he’s become a uniquely intricate and crucial part of the town, from counseling individuals with substance-related conditions and mental health issues, to working with students at all the schools, to building a rapport with every segment of the community to serving as the town’s conscience at times.

As Town Council President Mark Schwager said recently, Houghtaling is “the East Greenwich man for all seasons.” Once the COVID pandemic hit in March, Houghtaling shifted into high gear, suddenly everywhere, thanks to his live videos on the EG Academy Foundation Facebook page.

According to Houghtaling, when he first got hired, his primary job was dealing with rite-of -passage-type substance use, with mental health emerging as a significant factor around 20 years ago.

“What COVID has done to that is put an exclamation point on it,” he said of his work. “What COVID has done is enhanced isolation, especially among young people. It’s really disrupted family constellations. For example, as some adults may have lost their jobs, that’s caused stress in households. Kids who have been put into distance learning situations, now you’ve got moms and dads who are being asked to be elementary school teachers.”

During a Town Council meeting earlier this fall, Houghtaling highlighted some statistics since COVID began. First, more people were experiencing mental health issues and concerns, youths and adults. There was an uptick in alcohol use by teenagers, on a level more intense than rite-of-passage drinking, and far surpassing data from recent years.

“In some instances, it was isolated drinking where kids were drinking by themselves just to cope with some of the stress,” he said. “I think that in terms of mental health, adults have some significant struggles and there may be a little bit of a rise in alcohol consumption.”

Summer relieved some of the stress from the pandemic, as the warm weather allowed people to go outside comfortably and get away when necessary, making it easier to ignore one’s problems. However, Houghtaling pointed out that issues seen in March are coming back now that the weather gets cold again and everyone is forced to huddle together inside. COVID has enhanced alienation and brought to light family dysfunctions in the home, as well as increased alcohol use as a stress reliever.

He also emphasized the intense amount of stress placed on teachers once school began again.

“I think the people that show up have acted with decorum, especially the teachers,” he said. “I think they’re trying to model for students some courage and model with a can-do type attitude. But when you isolate some of them and chat behind the scenes, they’ve got some significant fears.”

Prior to COVID, he spent most of his time in the school system providing support to students in-person. He also was providing counseling for local adults. When the pandemic hit, everyone was forced to isolate and follow strict social distancing guidelines. So, he had to completely restructure the way he was providing care. For someone who loves to connect one-on-one, that was challenging, especially since Houghtaling is the first to admit he’s something of a Luddite.

Pre-COVID, if you wanted to reach Houghtaling you called. Maybe you emailed. You did not text. Since the pandemic descended, he’s relented somewhat but still far prefers talking face to face or at least on the phone to sending characters out into cyberspace.

His solution to social distancing and the need to conducted business out-of-doors? Walking.

Town Manager Andy Nota said he appreciated the initiative Houghtaling offered during this crisis because “not everyone runs into the fire in an emergency.”

“When this first hit, he went into a seven-day-a-week schedule,” Nota said. “Day and night, Bob has been handing out his phone number. Anybody that’s in need, calls him and he is there and prepared to lend significant support.”

Houghtaling runs a variety of different programs that have been adjusted for COVID, meeting with Nota on a weekly basis to make any necessary adjustments. Since the beginning of his time in EG, he’s run a teen center on Friday nights. In recent years, it took place at Eldredge Elementary School but that stopped when the pandemic hit and schools were shut down. He transitioned to meetings with kids beside the London Street train underpass, to hang out and relax and eat some pizza.

“When you’re providing treatment, you really, many times, need to be with the person, in terms of being able to fully appreciate how that person’s doing and be able to interact with them directly,” Nota added. “So, Bob adjusted that.”

Houghtaling has also encouraged equine therapy for people of all ages at Faith Hill Farm, a horse farm in East Greenwich, to reduce stress and depression. There’s also Lucy’s Booth, a weekly podcast offered through ASAP, a group of high school kids that educates the community and their peers, supporting them to some extent on issues pertaining to mental health. The podcast gives information about mental health issues and concerns.

“In many ways, it’s actually geared towards creating a bridge between them and parents,” he said.

Listen to Lucy’s Booth episodes here or here. He does another program called “Prevention During a Pandemic” with the Kent County Prevention Coalition. This program can be found here.

“You have to create a myriad of programs that go to where they are,” he said.  “Sometimes it’s in-person. Sometimes it’s the computer. I think my ultimate goal is to help people find support to get through some of this stuff, and to maybe serve as a resource to help lead them towards getting help if they need it, or just finding a way that they feel they can belong and let off a little bit of steam.”

It seems Houghtaling has taken some of the negative effects of the pandemic and created a silver lining.

“Now we have the opportunity to teach everyone how resilient they can be, if we work together, if we’re honest with each other, if we can talk about it and somehow we can stay connected,” he said. “Can we get out of this as better and more reflective people? If we can model some of that for young people, it could be a gift in bad times, without minimizing all of this.”

It’s safe to say, Bob Houghtaling is a light in the dark.