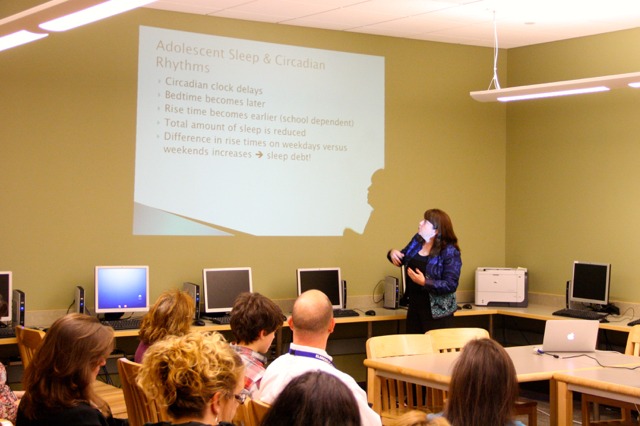 The principal from Sharon High School in Massachusetts came to the forum on pushing back school start times Monday night to talk about his school’s experience doing just that. His message? It’s hard, it’s courageous, but Sharon would never go back.

“Once the School Committee made the decision,” said Sharon Principal Jose Libano, “where there’s a will there’s a way. And if this is the right thing for our students and their growth, we had to find a way to make that happen.”

Sharon students have some extra time during the school day to complete homework and get extra help because – unlike in East Greenwich – Sharon High School as a daily 40-minute study hall period. EGHS had study halls until six years ago, when the state Dept. of Education said study halls could not be counted as the required 330 minutes of daily instructional time.

But moving to a later start time was still challenging, especially in the areas of athletics and buses, Libano said.

In terms of sports, he said the school told coaches practices could not start before 3:30, roughly an hour after school lets out, so students would have time right after school to get extra help if they needed it or attend a club meeting. Interscholastic games had already been starting at 3:30. No change was made for home game starts but some adjustment was made for away games, depending on the distance traveled.

In terms of the buses, like East Greenwich, Sharon uses a three-tier system. Today, students at the middle school start their day at 7:45 a.m. and the four elementary schools start between 8:50 and 9 a.m. The change did not require additional buses.

In East Greenwich, Cole Middle School and EGHS start at 7:33 a.m.; Eldredge and Frenchtown start at 8:20 a.m. and Hanaford and Meadowbrook Farms start at 9:05 a.m.

EG parent Katherine Sharkey – a doctor specializing in sleep issues – spoke to the about 40 people gathered for the forum to help provide that science.

Sharkey said as children move into adolescence, their sleep requirements remain higher than that of adults (8 to 9 hours a night for teens versus 7 to 8 for adults) but, biologically, their bodies want to stay up later.

“Late nights are easier to achieve but they still need their sleep,” said Sharkey. For many students, that means accumulating a “sleep debt.” While students may try to remedy the situation by sleeping in on the weekend, Sharkey said that just doesn’t work.

Getting those students an extra 30 minutes of sleep a night would really help, she said.

Some in the audience, however, questioned whether students would actually get extra sleep if school start times were pushed back.

“On Tuesday nights, they tend to push it back a half an hour in terms of when they go to bed,” said Bob Durant, referring to his two sons and how they react to the later school start on Wednesdays at EGHS, when the school day doesn’t start until 8:05 a.m.

“What concerns me is we just shift 40 minutes but there’s no net gain in sleep,” said parent Stephen Toljan. His son, also named Stephen, addressed the audience as well.

“Pushing the start time of school back wouldn’t necessarily make me get more hours of sleep because all we’d be doing is moving the time I wake up in the morning and having that ripple to the time I go to sleep at night,” said the younger Toljan, a 9th grader at EGHS.

Sharkey and Libano both cited studies showing that later start times did, in fact, translate to more sleep for students, but the younger Toljan said there were so many screen distractions today it was easier than ever for kids to stay up late.

“In order to get kids more sleep, we’re going to have to change things like, say, football schedules and the amount of homework teachers give out,” he said.

There was agreement there – with Sharkey, Libano and audience member Fred Procopio, a former pediatrician who now works with students at URI health services, all mentioning the need to consider more than just pushing back the start of school.

“You can’t just make this change without having other discussions – about practice times, about homework, about the number of AP classes kids can take, screen time, sleep hygiene. All these other pieces have to be part of an ongoing discussion,” said Libano.

“What are we doing to our kids?” said Procopio. “We’re having a discussion about health and safety but we’re trying to still squeeze it all in.”

For Libano, however, moving the start time later has been a real positive for the students.

“I would never go back and I haven’t received a call to go back in four-plus years,” said Libano. “The only calls I get now are like this – ‘What have we got to do to do it?'”

In the top photo, Katherine Sharkey addresses the forum. To hear more from Sharkey about this issue, check out this public access interview from June: https://www.youtube.com/watch?v=9BC4ZQk56Ak&feature=youtu.be.

Also, in August, the American Academy of Pediatrics issued a statement in favor of delaying school start times. You can find that statement here: http://www.aap.org/en-us/about-the-aap/aap-press-room/Pages/Let-Them-Sleep-AAP-Recommends-Delaying-Start-Times-of-Middle-and-High-Schools-to-Combat-Teen-Sleep-Deprivation.aspx.