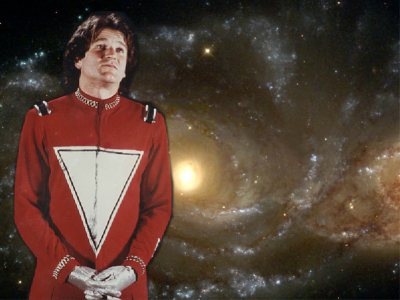 Much has happened to and for Mork, Mearth and Mindy over the last 30 plus years. They have moved about a bit, traveled through the ages, saved a planet and now it is time to come home. Earth has gained much from Mork’s visit. Losing him is a great, great loss. He has made us laugh. He has made us cry. In the end we are better off for his being amongst our kind. Walt Whitman once wrote, “The powerful play goes on.” It has been a fun and meaningful journey.

Nanu Nanu. This will be my final report before I leave planet Earth. My time here has taught me a great amount. While the human race has much to learn, many of their species have demonstrated intelligence, kindness and a wonderful sense of humor. My friend/wife Mindy is certainly at the top of the list. Fonzie and Richie Cunningham aren’t too bad either (Richie’s now bald!).

There are many things that continue to baffle me however. Humans fight and kill each other over which deity they chose to honor, the color of their skin and concerning something called oil (still haven’t figured that one out).

When humans are not killing each other many argue about who they can marry and where. Some say if boys marry boys or girls marry girls, they’ll go to a place called Hell (I think that is another name for a town called Washington, D.C.). This Hell is also the place where politicians choose to ignore gun violence and poor people, and decide who can come into the country. Odd race these humans.

If I had arrived on Earth much earlier, there would have been a bunch of people worthy of my conducting an “alien abduction” on. Abraham Lincoln, Marie Curie, Martin Luther King, Rosa Parks, Mohandas Gandhi and a dude named Peter Parker who was bitten by a spider and turned into someone who rescued cute girls. They are capable of much greatness, these humans. But, they are also full of contradictions.

Perhaps the thing that saddens me most about Earthlings is how they treat those with mental health and addiction concerns. At times it gets so bad that individuals with such concerns are placed in something called prison. People in prison wear ill-fitting uniforms and spend most of their time in a cage.

To make matters worse, many humans with mental health and addiction problems wind up sleeping on the street or under a bridge. Often, in desperation, they resort to something known as suicide. Seems like humans don’t understand those who have these problems. I just heard about a poor fellow named Williams who took his own life after struggling with many issues for years. Very sad.

Unfortunately these unusual creatures wait for a tragedy before making changes. Cherry Coke was one example. Disco, ignoring global warming and Sarah Palin are others. The list could go on. I don’t know what it will take for people to see that loneliness often leads to despair, which in turn brings on things like alcoholism, prescription drug abuse, homelessness, suicide and other tragic situations. Oftentimes it appears as if they would rather watch behemoth-sized Earthlings crash into each other while fighting over a funny shaped ball than do something about it. You’ve got to see this to believe it.

The game is called football. This is very interesting because the ball spends more time in a participant’s hands than feet. This is like calling politics the art of compromise. One president did indeed turn politics into an art however. Bill Clinton was an artist of sorts. His medium was BS.

After coming home from a building referred to as “church,” millions glare at flat-screened visual devices hoping to see hometown heroes clobber an opponent. I am especially fond of the concussions. In order to feed the viewers’ frenzy, large amounts of green paper are provided to the combatants as compensation. All of this sedates those who watch so that real world concerns don’t enter their brains. I’ve said they still have a ways to go. Before leaving perhaps I can do something that can change things.

These humans also resort to extremes. They talk about their concerns regarding illicit drug use, but then turn around and push for more marijuana vendors. Brownies for everyone! They also allow someone who took an oath to “do no harm” to over-prescribe some very powerful medications. This leads me to wonder whether their appetites exceed an ability to control them. Speaking of extremes, have you been checking out what is going on in Ferguson, Missouri? Police with assault weapons and armored vehicles are combating citizens. I’m afraid that pointing fingers has more power than listening.

Humans also espouse the importance of children but allow them to watch all kinds of violence on TV and video games as well as purchase materials that demean and exploit others.

I know that upon returning to Ork you will expect me to file a complete report on my Earth experience. While fully understanding that humor is not allowed at home, on Earth it is an essential coping device. In fact, a good laugh is something that can get human beings through the day. Apparently a laugh is a dose of medicine that goes down quite well. This is a trait we might want to adopt from them.

Earth’s version of Yoda (Yogi Berra) once said, “When you come to a fork in the road, take it.” I guess life is a little bit of action, some luck and an openness for adventure. For me, this trip was very worthwhile.

It’s time to leave now Orson. Hopefully I’ll see you soon. As you wait for my return consider having a good chuckle. Also, in the words of an ancient, and dead, Earth Philosopher, “Carpe Diem.” They made him drink poison, but he made a really good point – it means to seize the day. This is a gift from me to you.

Robin Williams was a special talent who despite his struggles gave us hope through laughter. Perhaps his passion will motivate us to look at how we address those with substance abuse and mental health concerns. He certainly “contributed a verse.” So long.