More Stories From 2018: From Ethics & School Funding to the Election & Feisty Public Comment In 2018, EG News posted many stories that may not have made it into the top 10 in terms of page views, but were nonetheless worth remembering as we close the book on this year.

Town Council Outtakes: Manager Search Update; Bond Debt; Feisty Public Comment
This story captured the rancor that was a regular feature of Town Council meetings – particularly during public comment – under the previous Town Council. Sometimes speakers would say their peace and no one on the Town Council would respond. But other times there would be a testy back and forth, as the exchange in this story illustrates, between resident Rob Vespia and then-Councilor Andy Deutsch and Town Manager Gayle Corrigan.

Corrigan and the Ethics Commission
The Ethics Commission found two complaints filed against former Town Manager Gayle Corrigan earlier in 2018 had enough probable cause to merit full hearings. The first complaint centered on Corrigan’s hiring of her business partner Linda Dykeman to serve as finance director for the town. The second complaint focused on Corrigan’s late filing of her 2016 ethics disclosure form that omitted more than $200,000 in earnings from her contract with the Central Coventry Fire District. According to the state Ethics Commission, Corrigan’s termination does not impact the two pending matters. According to Town Council President Mark Schwager, East Greenwich will continue to defend Corrigan on the first ethics matter, regarding the hire of Dykeman, since she took that action as town manager and the previous council voted to indemnify her on that claim. 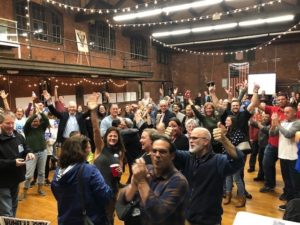 EG Democrats celebrate on Election Night at the Varnum Armory.

Election Coverage: Town Council Candidates: A Cheat Sheet and How EG ‘Flipped the Council’
Several people thanked us for the “cheat sheet” article that came out a few days before the November election. Such coverage goes to our mission: helping inform members of the community. The article about the remarkable election result and how it came about laid out the history leading up to the vote. Many people, including me, had had no idea how the election would turn out. But once the results were in, suddenly the result seemed obvious if you just focused on the level of public engagement at Town Council meetings.

School Stories:
Report Says Schools Underfunded by $1.2 Million
After two years of perceived underfunding by the Town Council, the School Committee had a performance audit done over the summer to figure out just how well the district was complying with the state’s mandated Basic Education Plan. The result showed the district would need $1.2 million this fiscal year to be properly funded. The committee asked the town for $700,000 in additional funding this year but the new council recently told them they needed to wait until January – in an effort to better understand the town budget – to respond to the request. If the two elected bodies cannot come to agreement, there could be another lawsuit in EG’s future.

8th Grade Trip to D.C. Voted Down
Just a couple of weeks ago, the School Committee voted against the trip to Washington D.C. that had been a tradition since 2000, because of the $1,400 price tag, the fact the trip extends over three school days, and less than half the 8th grade class had been participating. Many parents left comments on the story and Facebook decrying the decision, while some agreed the trip was overpriced. 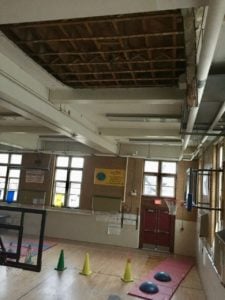 The area of the gym ceiling that fell.

Eldredge Gym Ceiling Partially Collapses; No Injuries
P.E. class at Eldredge Elementary was in session in the gym the morning of April 10 when part of the ceiling fell. Fortunately, the teacher and students had been in an area of the gym away from the collapse, but the failure prompted school officials to close the school the following day to check for ceiling weakness throughout the building. The school was deemed safe though in need of eventual reinforcement; repair of the gym ceiling is nearly complete, months after officials originally said it would be done.

A Tale of Two Walkouts: One Sanctioned, One Not
After the deadly school shooting at Marjory Stoneman Douglas High School in Florida, high school students around the country staged walkouts in protest. At EG High School, students worked with the administration on a “walkout” in the auditorium but 50 or so students decided to hold their own walkout outside.

We lost a few important members of the East Greenwich community in 2018, including “old EG” luminaries former Rhode Island first lady Sue Carcieri and beloved retired teacher and school administrator Lou Lepry. The loss of Nicholas Campanella at age 21 was particularly sad. David Dumas served as state rep for East Greenwich among other roles. Gil Thorpe, owner of the old Thorpe’s Pharmacy, had moved to South County but was remembered as a founding member of the EG Rotary Club.

Did we miss your top story for 2018? Let us know in the comments section below.

If East Greenwich News is helping you learn more about your community, consider supporting us with a donation. Click on the link below or send a check to EG News, 18 Prospect St., E.G., RI 02818. Thanks!