Mercurio Departs After 10 Years as Superintendent 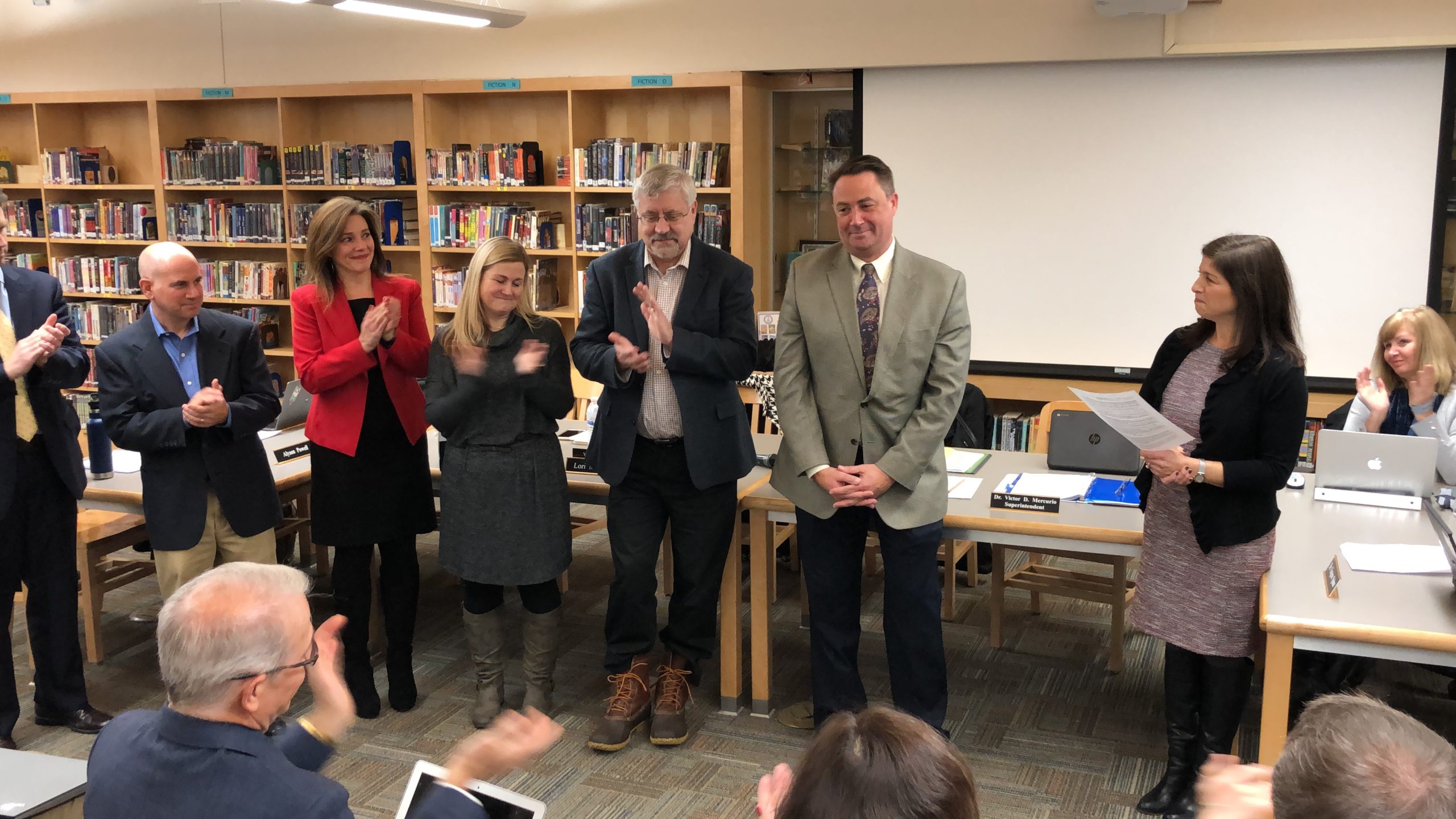 That’s because Mercurio is leaving after more than 10 years as superintendent. His last day is Jan. 2, but his last day in the office is Friday, Dec. 20.

Hired the summer of 2009 by a School Committee chaired by Jean Ann Guiliano, Mercurio had until that time spent his career right next door in Warwick, first as a teacher, then as an administrator.

He followed the charismatic Charlie Meyers as superintendent. Mercurio’s approach was quieter but calming, Perhaps that was a good fit since he arrived in the midst of perhaps the biggest building boom in the school district’s history and immediately faced some significant challenges.

Dr. Mercurio has served as the educational leader in our district for 10 years with professionalism, integrity, and a relentless commitment to supporting students, staff, and East Greenwich families. His legacy will live on in both students and staff as we continue to grow and develop as educators and learners. On a personal note, words are not adequate to express my sincere appreciation for his mentorship and leadership. His impact on me as an educator has been both inspirational and profound. – Alexis Meyer, EGSD Director of Teaching and Learning

First, there was the high school fields project. By the time he arrived, the turf had been laid on what is now known as Carcieri Field, but then it started to rain and puddles surfaced across large swaths of the turf. Mercurio hadn’t been around for the problem with bubbles on the high school’s new gym floor just a couple years earlier, but suddenly it looked like the district couldn’t get anything right.

Eventually, the turf field was fixed. But by then Mercurio had the building of the new Cole Middle School to handle, including unhappy neighbors that ended up suing the district and the town because of damage they said was caused the machines used to compact the ground for the new building.

Mercurio declined to discuss the lawsuit but he did say he hadn’t anticipated what it would mean to oversee such major building projects.

“I knew it was going to be daunting,” he said. “From a time standpoint, it was more time-consuming than I thought.”

While the new Cole was the largest building project, another challenge came in 2012, when the district decided to fix the floors at Meadowbrook Farms Elementary to mitigate the building’s constant dampness. In the end, a whole new HVAC system was installed, asbestos removed and flooring replaced. But not before a lot of handwringing and worry – could the dampness problem even be fixed? And what about the asbestos? Mercurio, the School Committee, and the building team stayed the course and the fixes worked.

Victor Mercurio created an environment that fostered progress across so many fronts –despite a myriad of challenges we faced along the way – and for that we are deeply grateful. The Number 1 thing I have learned from Dr. Mercurio comes from singer/songwriter Tim McGraw: “Always Be Humble and Kind.” – Carolyn Mark, Chairwoman, East Greenwich School Committee

Also early in Mercurio’s time in East Greenwich was the controversy over outsourcing of school custodians. Some members of the School Committee decided money could be saved if the custodians were outsourced. Many parents and union officials disagreed, making for crowded, rancorous meetings. Eventually, the School Committee voted to outsource, but then came to an agreement with the custodians and the uproar vanished.

Other than the custodian issue, union relations were relatively quiet during Mercurio’s time as superintendent. One other difficult time came in 2017, when the teachers union voted to “work to rule,” meaning they would work no more than what was absolutely required by the contract. But that came to an end a few months later when a new contract was signed.

Under Mercurio’s tenure, the district implemented the “1-to-1” policy at the high school, where each student was given a Chromebook to use during their four years. It was a dream of Principal Mike Podraza and then-School Committee member Jack Sommer that Mercurio ended championing. The cost was significant and it perhaps delayed implementation of all-day kindergarten (which was later mandated by the state) or the hiring of a curriculum director.

“I don’t regret doing 1-to-1 before the director of teaching and learning only because the 1-to-1 has had such a profound impact on how we do what we do at the high school level. It puts technology directly in the hands of kids and teachers,” he said. He said he did regret not adding more technology support staff. “We still need more people; we have a lot of machines.”

Working with the seven-member School Committee presented its own challenges, since members cycle in and out every two years. Mercurio was superintendent under four School Committee chairs. In addition to Jean Ann Guliano, Deidre Gifford, David Green and, now, Carolyn Mark, served as chair. In 2015, parents who had been agitating from the outside for changes like later school start time won seats on the committee. As a result, the district became one of the first in the state to implement later start time, despite some strong pushback from some in the community.

In 2017, the new Town Council hired Gayle Corrigan as town manager. She came with a hard-nosed approach when it came to funding the schools that was backed up by the council majority. The high school went without a librarian the 2017-18 school year, the School Committee had to accept the town’s finance director as its own, and the town shuffled school administrative offices. Mercurio may have been frustrated during that time, but he kept talking to town officials, trying to navigate whatever came the district’s way.

In 2018, he finally got to hire a curriculum director and, in 2019, he was able to hire someone to handle operations and finances for the district. After years of understaffing, the school administrative team was complete.

Mercurio said this week he wished he’d had the opportunity to hire a curriculum director sooner, “given the pace and volume of great work” now being done by Alexis Meyer, who’s been on the job for less than 18 months. “It’s helped to energize people.”

A sports lover, Mercurio said he was proud that his first administrative hire was Chris Cobain to serve as athletic director 10 years ago. “He’s been a great athletic director,” Mercurio said. He credited town leagues with helping to build strong programs that the middle and high schools have been able to draw from. He said he was glad the district was able to support interscholastic leagues at Cole as well as EGHS.

Victor’s educational knowledge, people skills, communication skills and his complete understanding of how educational based Athletics completes and often enhances the student experience was extremely important to my success and ultimately EG athletics success. His support of me as athletic director was unwavering and I am forever indebted to him for this. No words can truly express the gratitude and respect that I have for Dr. Victor Mercurio and the opportunity he gave me just over 10 years ago. I’m proud to be an Avenger and I am very proud of what we have accomplished under his leadership. – Chris Cobain, EGSD Director of Athletics

Mercurio acknowledges vision was perhaps not his strong suit as superintendent but he responded to the needs that arose.

“Having a grand vision and plans for where the district will go, that has to be balanced with the day-to-day work,” he said. “You need to be able to have the capacity to launch initiatives and sustain them over time.”

Mercurio said one of the biggest differences he’s seen since he arrived is the uptick in enrollment. As he has said often in recent years, “business is good” in the district.

“It’s a testament to the community,” he said, “but we’ve had to add staff and space is at a premium. That’s going to be an ongoing challenge.”

As to what message he’d give to his successor (Frank Pallotta will serve as interim and the hope is to have a permanent superintendent by summer), Mercurio said, “The budget is always a hey issue because you can’t do the strategic plan unless you have the funding.”

He added, “It’s important to be sure to not get caught up in the moment.”

Mercurio said he will miss the people and the town of East Greenwich. “I’ve enjoyed learning about the town’s history and how it shapes things even now,” he said. “It’s amazing how many roads lead back to East Greenwich.”