Meeting Tonight: A Vote on Corrigan but Not on Her Actions

Also, There Appears to Be a Presentation Planned 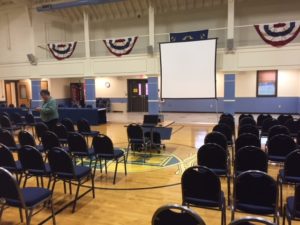 The set up for tonight’s Town Council meeting at Swift Community Center, including what looks like equipment for a presentation.

Superior Court Judge Susan McGuirl Tuesday gave the town another week before most of her order will go into effect.

“I’m going to give the town a one-week stay with respect to item 2C [on the Town Council’s agenda tonight] until Nov. 21,” McGuirl pronounced Tuesday afternoon after meeting with lawyers from the town and the firefighters union.

The one part of her order that will go ahead is the reinstatement of firefighter James Perry.

So, the council will go ahead with its meeting and vote on the appointment of Gayle Corrigan to serve as town manager. If that passes, they will vote on her contract. They will not vote on ratifying every action Corrigan took since she was previously appointed town manager on June 19.

That decision was prompted by a letter sent to the Town Council this morning from Access RI, an open government coalition that includes Common Cause and the RI ACLU. The letter urged President Sue Cienki to cancel the meeting or risk another Open Meetings Complaint on that third agenda item – ratifying all of Corrigan’s actions. Access RI said the item was too vague.

“Ms. Corrigan might have taken dozens, if not hundreds, of actions between June 19 and November 14, some or all of which may be of interest to various members of the public. However, they have no way of knowing exactly what decisions are going to be ratified. Indeed, in the absence of any delineation of the actions being ratified, the Town Council itself would appear to have no idea what it is voting on.”