Medrecycler: No Lease but Appeal Continues 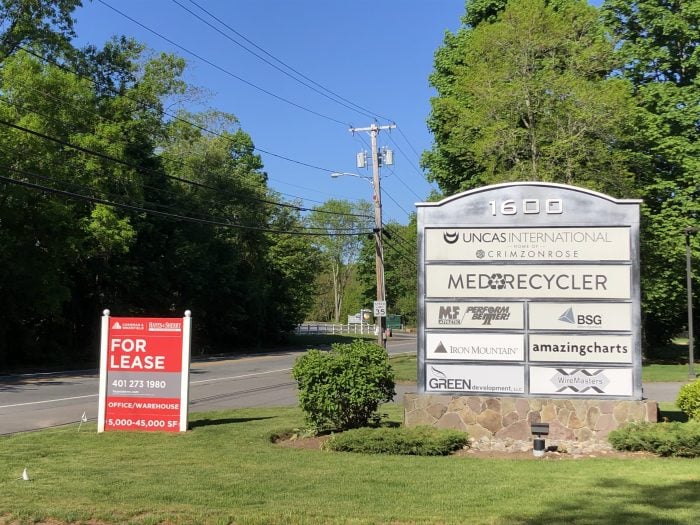 The medical waste disposal company Medrecycler-RI is no longer leasing a building at 1600 Division Road but it has not given up its appeal of the state Department of Environmental Management’s 2021 permit denial even though their application is predicated on that particular site.

The site was in West Warwick, just over the East Greenwich line.

Medrecycler was looking to operate a facility using a high-heat method called pyrolysis to break down (melt) different types of medical waste. The East Greenwich Town Council and EG and West Warwick residents along with environmental groups banded together to oppose the facility. They enlisted EG state legislators Rep. Justine Caldwell (Dist. 30) and Sen. Bridget Valverde (Dist. 35), who sponsored legislation that was signed into law last July to ban such facilities in certain areas, including 1600 Division Road, which sits across the street from New England Tech and some residences and is near a childcare facility.

DEM had granted Medrecycler an air permit in 2020, which East Greenwich and New England Tech are still contesting. But DEM denied the waste company’s application for a solid waste permit last July, based on a number of factors, including the new law. Medrecycler appealed that decision in August.

According to East Greenwich town solicitor Peter Skwirz, Medrecycler told DEM its Division Road lease was “null and void,” so the town is arguing the company’s appeal is “moot,” since permits are site-specific.

But the company is allowed to continue its appeal. DEM spokesman Michael Healey explained it this way: “Whatever MedRecycler is doing or not doing at its physical location really does not matter to DEM because they’re still pursuing their due process rights against us in administrative court. Earlier this month, the Administrative Adjudication Division gave DEM 45 days to file any dispositive motions (such as a motion to dismiss, etc.), and then MedRecycler will have 30 days to respond.”

The next date is a June 28 status conference. Find all the Medrecycler-RI page on the DEM website HERE. Calls for a comment to the company’s lawyer, Michael Resnick, were not returned.

Protesters Up Volume Against MedRecycler

Public to Hear from MedRecycler Jan. 25