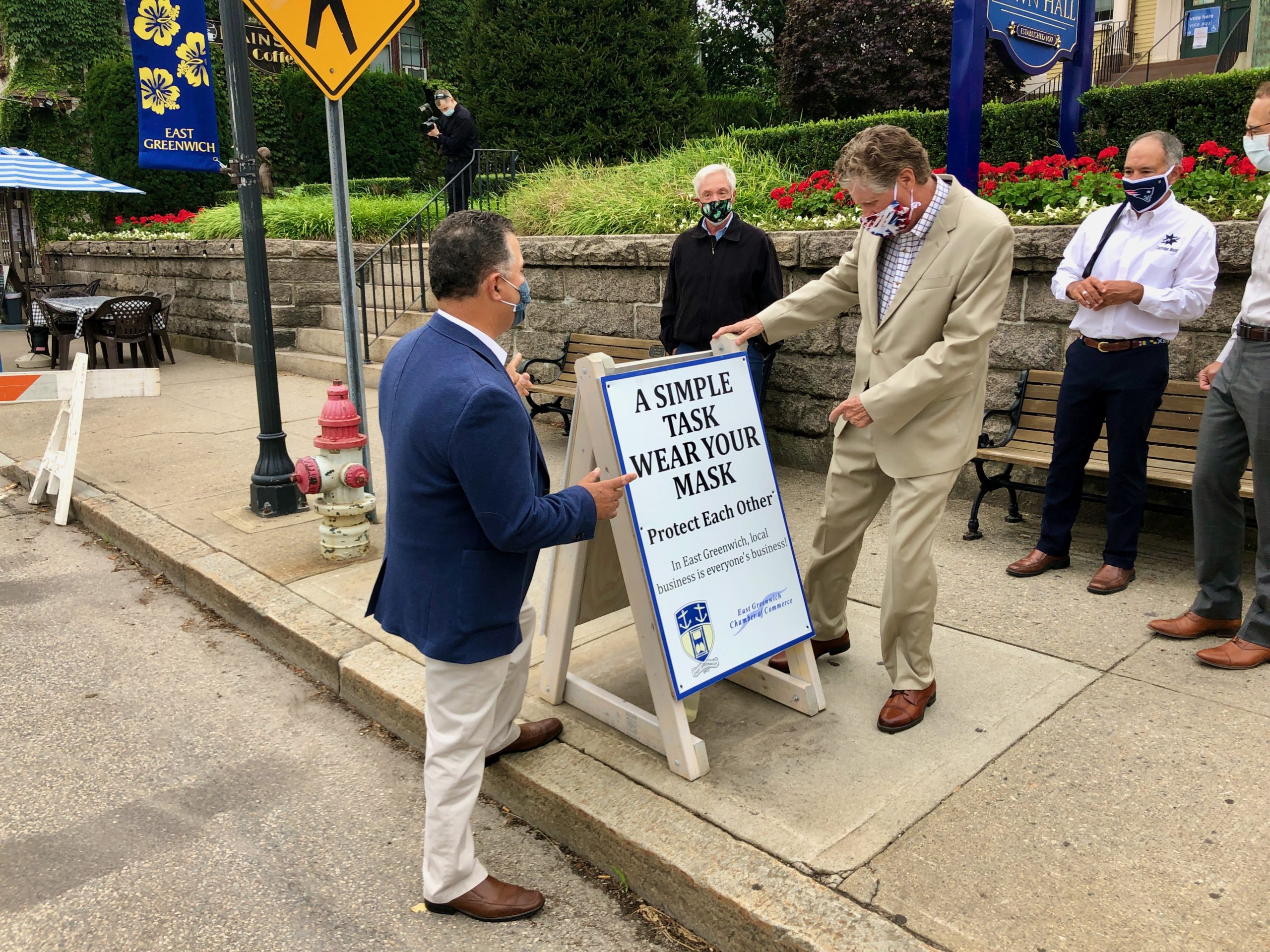 ‘Take It Outside’ Sundays are helping, but temporary

It’s all relative, but in the era of COVID-19, things are about as good as they’ve been in months for many local businesses, with the good weather prompting lots of foot traffic and restaurants able to accommodate diners outside. But colder weather is on the horizon and there’s no federal agreement on another pandemic-related stimulus in sight. That makes local business owners nervous about the next several months and they shared that with Lt. Gov. Dan McKee Friday.

“You’ve heard it from all these businesses: we need a life raft, we don’t need an anchor. And we’re being thrown anchors. It’s not good,” Steve Cinquegrana, owner of Mainstreet Coffee, told McKee.

Cinquegrana said he didn’t apply for a Payroll Protection Plan loan last spring but he did apply for a $10,000 loan and found the process quick and easy. “I got it like this,” he said, snapping his fingers. “This latest grant, I’m still waiting for it. You need [to give up] your first born … it’s brutal.”

Cinquegrana was talking about the state’s Restore RI grant, which is funded with $50 million of the state’s CARES Act federal stimulus money and meant to help small businesses hurt by COVID-19 with grants of up to $15,000. But many say the process to get the grant has been too difficult.

“If we wait until January to get more [stimulus] money, we’re not going to be open,” she said. “Now we’re getting into colder months and there’s no way we’re going to be able to survive if we don’t get some more money.”

So far, East Greenwich has only seen one restaurant close its doors – that was Red Stripe, which closed in March shortly after Gov. Gina Raimondo ordered restaurants to stop in-person dining because of COVID-19.

Meanwhile, the ‘Take It Outside’ Sunday initiative is working, Nota told the council, noting positive feedback from local business owners. The town, in conjunction with the EG Chamber of Commerce, is shutting down Main Street from Spring Street to King Street from 3 p.m. to 9 p.m. to give restaurants in the area more room to spread tables into the street.

“They really have exceeded our expectations,” he said of the Sundays, acknowledging the fine line between popular and too popular in the era of COVID-19. “We want people to come, but not too many people.”

Nota has been working closely with the state Department of Transportation on the initiative – Main Street (Route 1) is a state road and DOT is not a fan of closing sections of state roads. Still, the town has permission for this Sunday and can apply for two weeks at a time after that. Just how many Sundays it will last will depend on the weather. Nota said it would be nice to get to November, but realistically he expected maybe four or five more Sundays.

There has been some pushback to the traffic rerouting. Duke Street resident Liz Isdale said she is supportive of the effort to help the businesses but has asked the town to do a better job routing traffic through her neighborhood. She made a suggestion in a letter to the editor HERE. Nota Monday said the town has gotten the message and will be adding signage.

But he implored residents who know what’s going on to consider alternative routes through town during that 3 to 9 p.m. time period.

Your Community. Your Stories. We hope you will consider supporting our work by making a donation below (or mail a check to EG News, 18 Prospect St., E.G., RI 02818). Thank you!