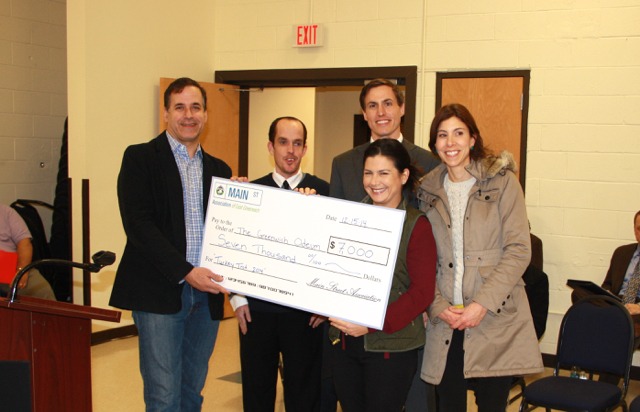 “It’s such a great, great event. We’re really happy to be the beneficiary,” Muoio said. “Many Odeum volunteers were there for the Turkey Trot and a bunch of us were running it as well.”

Each year, money from the Turkey Trot goes to benefit a local nonprofit. Past beneficiaries have been the EG Interfaith Food Pantry, the EG Animal Protection League and Bob Houghtaling’s Academy Foundation.

For the Odeum, said Muoio, the money represents another big step back toward financial solvency.

“This money goes to bills that we all inherited,” he said. “I’d love to say that this money could go to making major improvements to the facade or the interior, but a lot of this money has already been spent.”

“We’re getting there. We’re gaining on them,” he said. “Each performance that we put on – obviously successful performances like Cherish the Ladies this month – they go a long way. But this is a big check. It’s amazing. We’re really excited.”