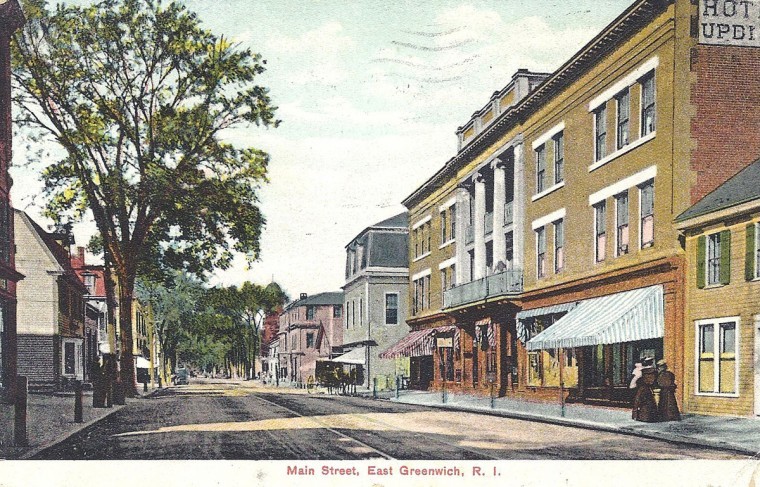 Old East Greenwich was about one square mile in size. The town’s borders ran from the waterfront of Greenwich Cove west to about Kenyon Avenue. It ran north to south starting at Division Street at the north to about First Avenue on the south. Most of the homes and businesses were located on Main, King and Peirce streets.

There were a little over 200 homes built in the 1700s and 1800s. About six homes were built in the 1600s. Old Main Street has about 80 houses, businesses, churches and public buildings. Main Street is also known as the Post Road, or Route 1. This route runs from Maine to Florida for a total of 2,369 miles.

It was not until 1837 that stores began to spring up in numbers. From 1837 to 1879 the town grew business wise. The Main Street as we know it today has not always been Main Street. In the early years of the town King Street, which ran from the waterfront up the hill, was considered the town’s main street. Main Street running north and south was not considered the main artery until the latter half of the 18th century. For a long time, Main Street was a dirt road. It was mud most of the time. In 1889 stone was taken from what is now Eldredge School field, crushed, and used to macadamize Main Street. It was the first paved road in the town. In 1900, a trolley ran to Providence and to Narragansett. The tracks were removed in 1928.

One of the charming things about early Main Street was that it was lined with beautiful Dutch Elm trees for the full one mile length of the street. In the mid 1930s the trees were struck with the Dutch Elm blight. The town tried to save the trees by spraying them. It helped for a short time. In 1938 the hurricane took a toll on the elm trees. It was hard for a tree to hold up to 186 mile per hour winds. Those trees that survived were cut down when the Main Street was widened in 1940. Recently I asked a number of my classmates, all who are in their mid 80s or late 80s, what their most fond memory of East Greenwich is. They almost all said it was the Main Street with all the beautiful elm trees.

In the early years parking on Main Street was not a problem to do shopping or do business. Since most people lived not much more than a half mile from Main Street they walked. People walked to work in town and the children walked to school. Just about everything you would want or need could be found on Main Street: armory, post office, candy store, bike repair, barber shop, drug store, hotel, private homes, beauty parlor, grocery stores, hardware stores, liquor stores, clothing stores, shoe stores, shoe repair, banks, churches, restaurants, blacksmith, auto sale & repair, gas stations, bowling alley & pool hall, municipal buildings, fire station, funeral parlor and telephone exchange. Shopping was easy on Main Street.

It was common to see a small group of housewives on the street corner talking. I recall during World War II that the main topic of conversation was, “Where is your loved one serving overseas?” On one occasion a mother in a very sharp tone asked a mother why her son wasn’t in uniform. Draft dodgers were not very popular. There was a large billboard on the courthouse lawn with the names of all citizens from the town that were in the service. There were 344 names on the board, 9 had Gold Stars. 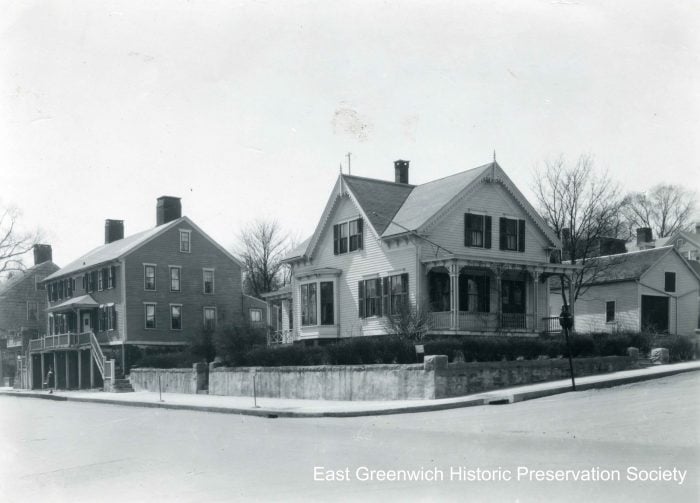 Davenport House sat at the corner of Main and Division streets. Photo courtesy of EGHPS

Over the past 100 plus years there have been over a dozen major changes to Main Street. Not all of these changes have been in the best interest of the citizens. A number of homes and structures that I knew as a youth are gone on Main Street. The first home that I recall being razed was a very stately home on the corner of Main and Division Street. It was a very large three story home with three chimneys and a porch on the second level overlooking Maine Street. The home was built in 1749 and razed in 1930 to make way for the Post Office Building. 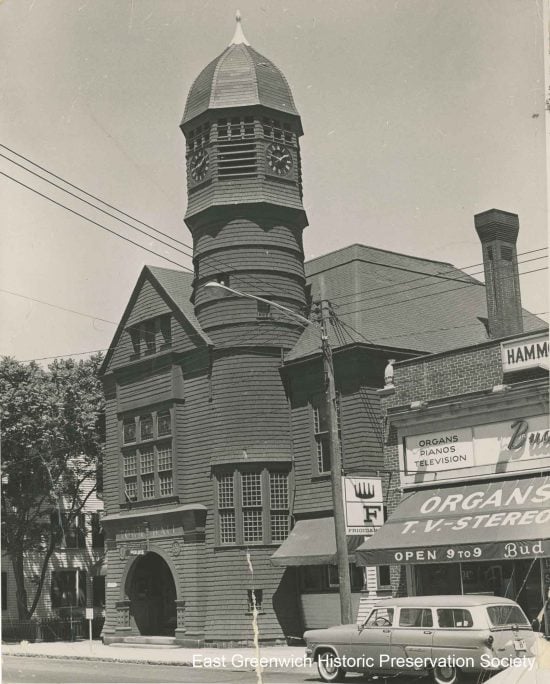 The old Town Hall was razed in 1964 to make way for municipal parking lot that exists today. Photo courtesy of EGHPS

Of all the buildings razed on Main Street the razing of the old Town Hall was a crime. The justification for its removal was that it was costing too much to retain.The building was built in Queen Anne style in 1885. It had a 70-foot bell tower with four clocks that chimed the hour 24 hours a day. The clock bell could be heard all over the old town. The clock bell weighed 1,200 pounds. The building was razed in 1964 to make way for a parking lot.

Our Lady of Mercy Catholic Church which was built in 1867 was razed for a small shopping center in 1960; the parsonage and carriage house were also razed. 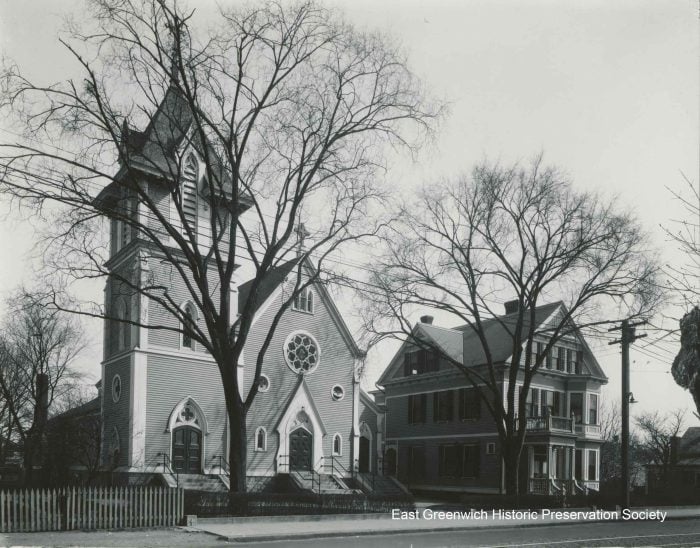 Our Lady of Mercy church when it was still on Main Street. Photo courtesy of EGHPS

A house on the corner of Main and London streets, built as early as 1712, was razed in 1940 to make way for a gas station.

At the start of World War Two, a USO building was constructed on the corner of Greene and Main streets. It was used as a facility for servicemen. After the war, it was converted to a movie house. In 1995 it was razed to make way for the Centreville Bank Building. The Union Block was made up of nine two story wooden homes that were rented to the Union Mill and Drysalter workers. They were located on the corner of Greene and Main streets. They were torn down in 1954 to make way for a new shopping center. 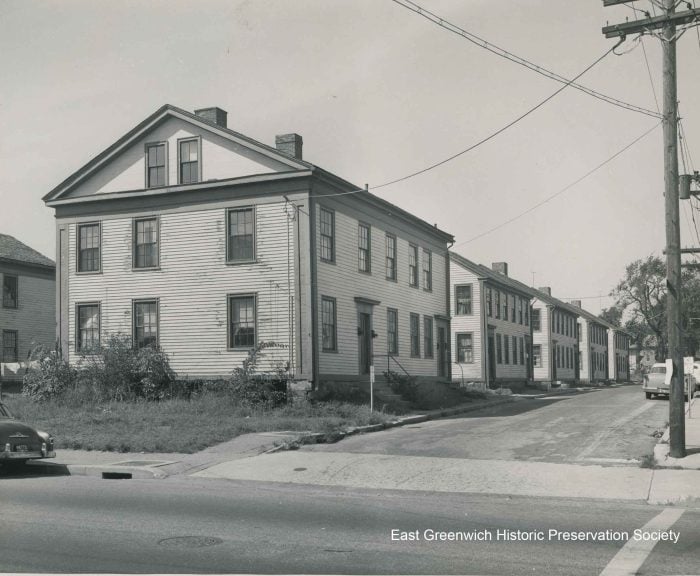 The Drysalter Houses or Union Mill houses on Greene Street, where the CVS plaza now sits. Photo courtesy of EGHPS

A home built in the early 1700s once stood on the corner of London and Main Street. It was razed in 1940 to make way for a gas station.

In the 1900s, the following very old homes were razed in the name of progress:

Next door to the Town Hall on the south side was the First Rhode Island Central Bank. It was built in 1759 and was razed in 1938 to make way for the construction of the F.W. Woolworth 5 & 10 Cent Store. 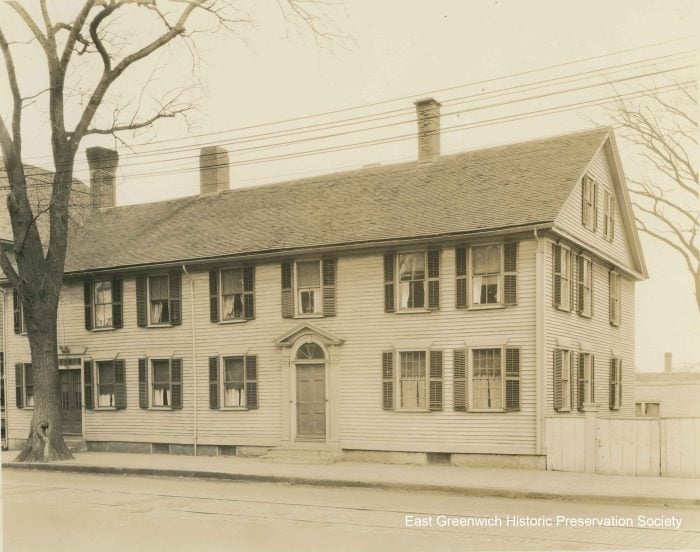 The Second Rhode Island Central Bank, built in 1840 once stood on the corner of Division and Main streets. It was razed in 1913 to make way for the building the Varnum Memorial Armory. The armory had two very large Rodman Cannons from the Civil War mounted on each side of the entrance. The cannons were later donated to a World War II scrap drive.

The Cook-Lawton House once stood adjacent to the Methodist Church on Main Street. It was built in 1803. It was razed in 1924 and a one story brick bank building was built.

The Joseph Greene House, known as “The Sterling Castle” built in 1776, was located on the corner of Pierce and Main streets. It was razed in 1956 and is now a parking lot. The Mowry-LeBaron House once stood on the corner of Church and Main streets. It was built around 1790. It was moved up the hill to make way for the building of the Masonic Lodge Building. It has since been razed for a parking lot.

The Judge Loomis Home, built in the early 1800s and originally located on the corner of Melrose and Main streets, was moved halfway up Melrose Street to make way for the Greenwich Theater in 1925. The Loomis house was jacked up, put on rollers and pulled up the hill by a large team of horses.

The Brick House located on the corner of Long and Main streets was across the street from the fire station. It is one of the oldest buildings in East Greenwich. Built in 1767. It was the first brick home in town and was a Georgia-style brick building. When rumors started to circulate that the Fire District planned to purchase the Brick House and raze it for use as a parking lot for the fire station across the street, the founding members of the EG Preservation Society took action and in March 1968 bought the building to save it from destruction. Preservation of the old Brick House was the East Greenwich Preservation Society’s first project. Today the house is listed in the National Register of Historic Places.

The Jewel in the Crown of all structures on Main Street was the Kent County Courthouse (now known as Town Hall). It was constructed in 1806. When word got out that there were plans to raze the building and replace it with a modern structure, citizens became alarmed and put a stop to the plan. This is a good reason that we should support historic or preservation societies.

In the last 100 years, 14 or more very old homes have been razed, but we have gained six or more parking lots.

Time often takes away the ugly and beautiful.

Glenn King, 90, grew up in East Greenwich and now lives in Tennessee. A U.S. Marine who served in World War II, King is on the EGHS Wall of Honor.